Today’s plan was to rise at 5.30 and walk 39km to Chateauvillain. It failed but (spoiler alert) the day ended well. We set off at 6.10 and crossed town heading into the surrounding chalk hills. At the summit I realised my precious walking pole was still in the hotel so I had to nip back to collect it, adding 6.5km over steep gradients to the day’s walk. But actually it didn’t matter because the day’s plan had already unraveled. Neither of us was up for the 39km. We enjoyed the beautiful woodland walk and after 17km we descended into Clairvaux to book into a suitable hotel.

Clairvaux is more abbey than town. The abbey is so old it was home to St Bernard. It is a huge sprawling site and was a prosperous enterprise when the French Revolution struck. From then onwards it served as a prison. Today there is a high security prison in new buildings while the ancient abbey and prison buildings are accessible on a guided tour.

So we arrived in Clairvaux and fell into the bar. After some refreshments, Paul called the Abbey hotel but it was full. Next the B&B but that too was full. I pulled out my accommodation list and discovered the Fraternity of St Bernard, a group of sisters who run a house opposite the abbey to accommodate visitors to inmates. They will also accommodate and feed pilgrims, on a donation basis. We made the arrangements and fell gratefully onto our beds, exhausted.

In the afternoon we joined a guided tour of the abbey (but not the high security prison). It was fascinating to learn about the abbey and how it became a prison. The church was demolished and the stones used to build the three high walls. It was the inspiration behind Victor Hugo’s hit musical “Les Miserables”. Claude Gueux was jailed for a trivial misdemeanour amidst a life of poverty and then beheaded in 1831 for killing a warden who separated him from his cell mate. Claude Gueux became Jean Valjean and the rest is history. Millions have been spent restoring parts of the complex but the task is impossibly big and the Government has announced the closure of the prison in 2022. No one knows what will happen to this historic site after that. Perhaps a Les Mis theme park with nightly performances?

Amazingly two more pilgrims arrived here and we all ate together. One is Korean and left Canterbury on 16 June (10 days after us). The other is walking from his home in Poland to Compostela.

Our room has a great view over the complex. We can see the huge walls and watch towers and I expect them to switch on the floodlights after dark. It’s ultra secure but we’ll probably lock the windows tonight.

Tomorrow’s plan is the continuation of today’s plan.

We found a hang glider parked in the woods. Then saw this launch pad 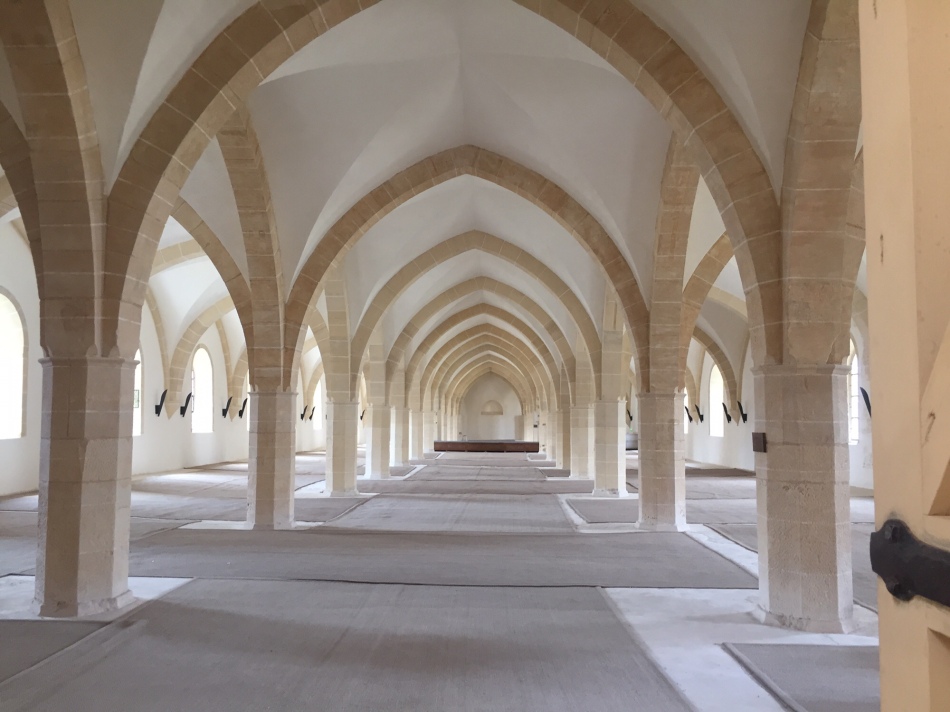 The benches around the exercise yard

Dinner this evening with the sisters