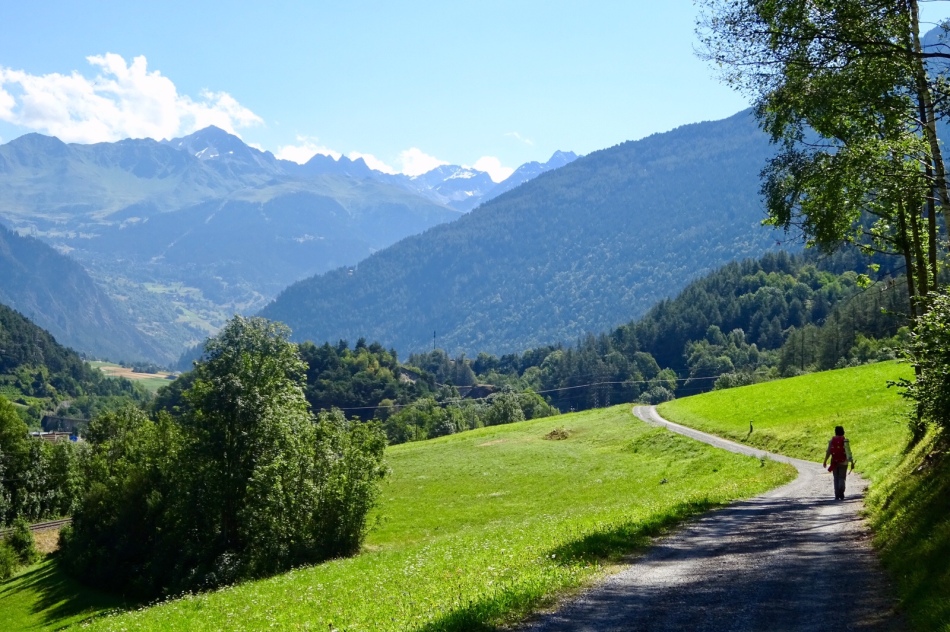 I’ve been looking forward to crossing the Alps since Paul and I started our walk to Rome. Many consider it a highlight of the Via Francigena; it is certainly steeped in history. We follow in the footsteps of Julius Caesar, Hannibal, Charlemagne and Napoleon among others. Nowadays, Napoleon would probably have taken the train, occupying a 1st class carriage with his generals while the troops sat in 2nd class. Hannibal would have driven his elephants through the tunnel and Caesar would have flown in his Airforce 1. Our pilgrimage travels at the same speed as pilgrims traveled 1000 years ago and faces the same physical challenges. Perhaps pilgrims will follow us for the next 1000 years as well.

This morning we five started our day with a sufficient breakfast in the Martigny Hotel du Rhône. It was too early to tell whether my tummy problems were cured so I just ate normally. We set off and all was well.

Today’s walk was 20km from Martigny (471m) to Orsieres (887m). The path climbed and fell so frequently that it would be misleading to subtract 471 from 887 to see how much we climbed. Anyway it felt fairly easy. So easy that the local Canton has installed some exercise facilities along the way. The path climbed through woods and crossed pastures. We saw fields of thyme and rushing streams cascading down waterfalls, as you would expect. Cowbells filled the air with music.

I was tempted to tell the heroic version of our climb with ropes and all the climbing equipment in use as we clung to sheer cliff faces. But this blog only recounts the truth, as I see it. So it was a nice stroll with a pleasant stop for an apple juice and, a little later, a good salad.

We met two more pilgrims during the day. First D, a Roman Catholic priest from America who started in Lausanne and is walking halfway to Rome. He couldn’t persuade his bishop to give him any more holiday. D told me he has walked the Camino as well as some long distance footpaths in the UK. He prefers a pilgrimage to a purely physical walk because he enjoys the spiritual element. I find it very difficult to explain the difference between a pilgrimage and, for example, walking the Pennine Way. They are both wonderful experiences but the pilgrimage offers something more than a purely physical challenge. This spiritual element is something that many people are seeking and that is why the Camino has become so popular. We asked him if he has seen any other pilgrims and he said he’d seen just one, Ruedi, whom we met some time ago. There is no hiding on the Via Francigena.

Secondly, M joined us for a few kilometres while I was engrossed with D so I never spoke to her. Apparently she started her pilgrimage in Langres and is stopping just over the Pass.

Tomorrow we climb 1000m over 14km to Bourg-St-Pierre. It should be more thrilling. 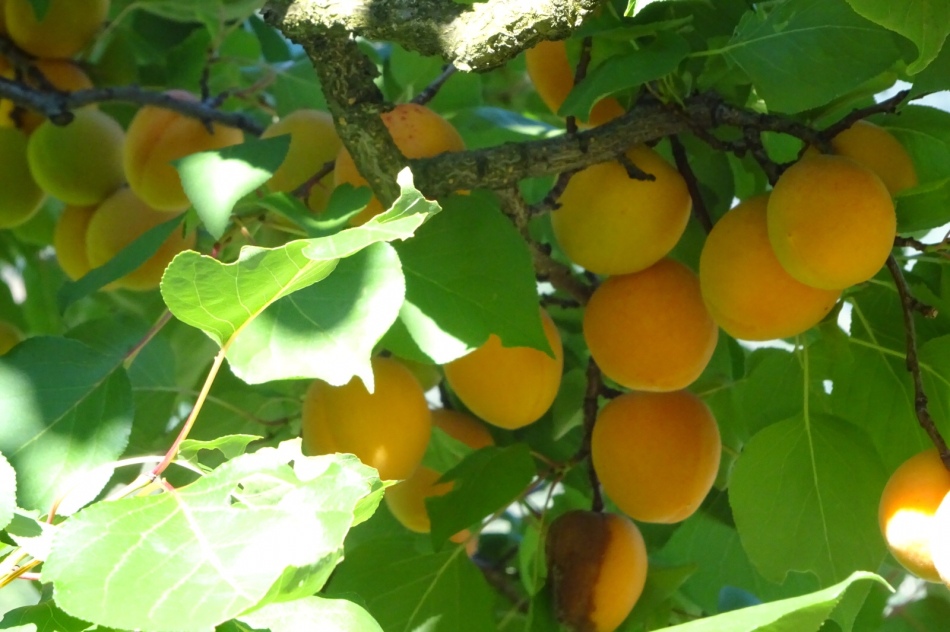 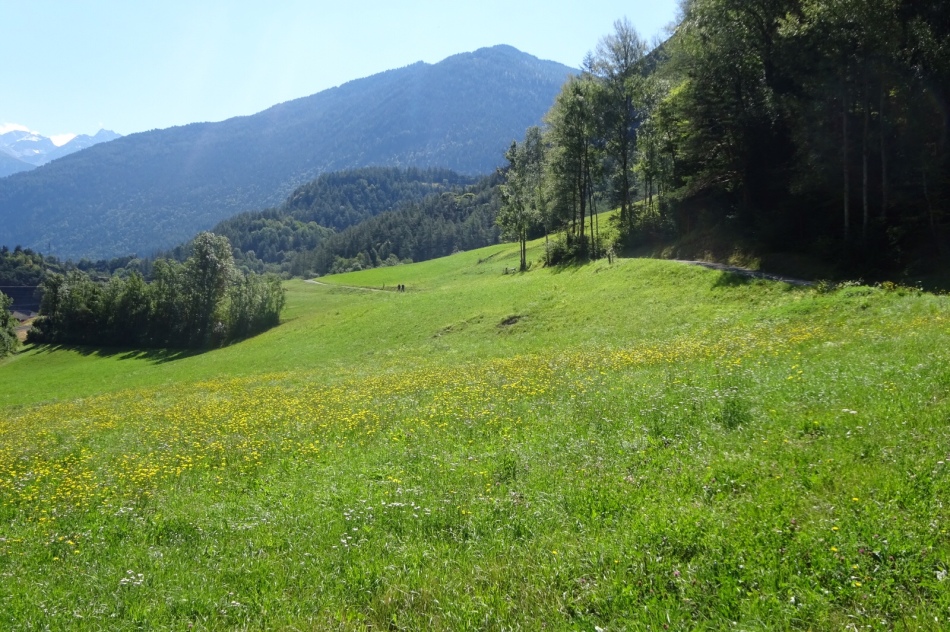 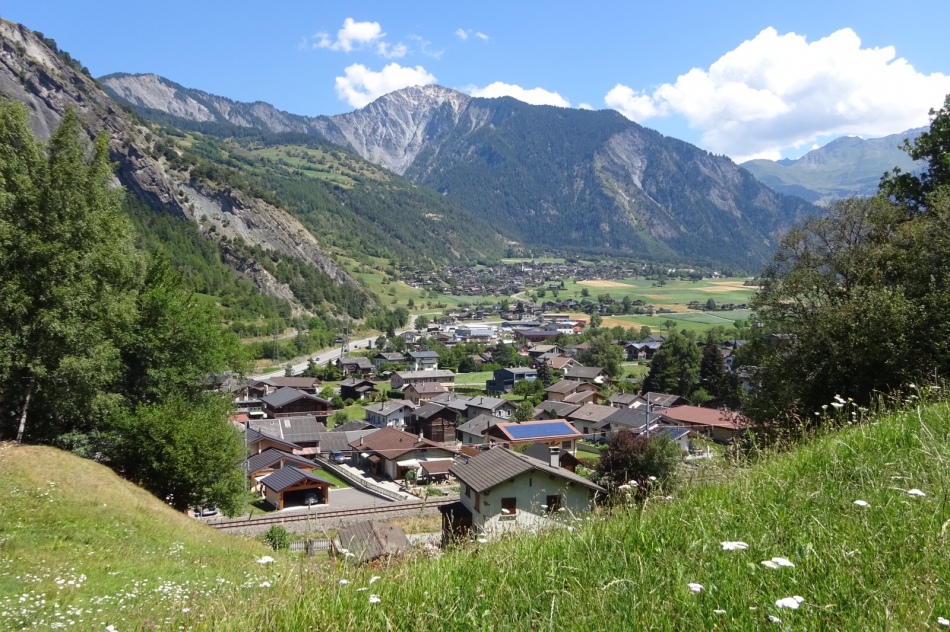