We shut the door on our fabulous apartment in Siena this morning and headed just far enough out of town to find a bar charging normal prices for a cappuccino and croissant. Soon after that we left Siena behind and made for the hills.

We met A, a young Italian man who supports Inter Milan and is walking for just a few days along the Via Francigena. He reminded me how Inter knocked Chelsea out of the Champions League in 2010. It always amuses me how these football types dredge out some isolated incident from many years ago to gain a conversational advantage. However I much prefer to talk to a true fan of the game rather than someone who cares not a jot about football. Somebody once said there are only three true sports: bullfighting, mountain climbing and motor racing. The rest are mere games. Nowadays you’d have to drop motor racing and bull fighting.

It was a fairly standard morning in Tuscany. The sun rose and warmed us up to 33 degrees. I deployed my solar umbrella. It really is a terrible ordeal walking in the direct sunshine without the umbrella attached to my backpack. Paul doggedly refused to buy one in Switzerland when he had the chance and now I feel sorry for him up ahead, zigzagging in the heatwave like that chap in The Good, The Bad and The Ugly.

We had to stray 0.9km off the path to find a bar and I teased him a bit about not being particularly thirsty and how we could skip the Frizzante stop. It didn’t go down too well and I thought I might soon be doing a Mary Poppins act clinging to my umbrella. When we reached the bar we upgraded to a litre of Frizzante each and the fruit juice. It was just enough to fuel us to a darling little place called Buonconvento. The village looks like a former film set with fortified walls and towers. Inside we stopped at the first restaurant, a super place with a pilgrim menu which meant we ate very well for 15 Euro. That’s very cheap in Italy.

I booked us a B&B on Booking.com. We always try to avoid it but we are really into the wilds after Buonconvento and we didn’t want to risk having to do a 50km day. I found a room, pressed <confirm> and a millisecond later the money was snatched from my bank. A few minutes later the owner called me to apologise but the room was no longer available. Eventually Booking.com confirmed a refund would reach my account within 7 to 12 days. Tell me about it.

A was already booked into that B&B in a single room and we saw him outside a bar entertaining two young ladies who must have taken our room. But all’s well that ends well. We have a great hotel room with a breakfast tray in the minibar and it’s right by what is probably the finest gelateria in the whole of Italy. Just try choosing only three flavours from 32 on display. It’s impossible. 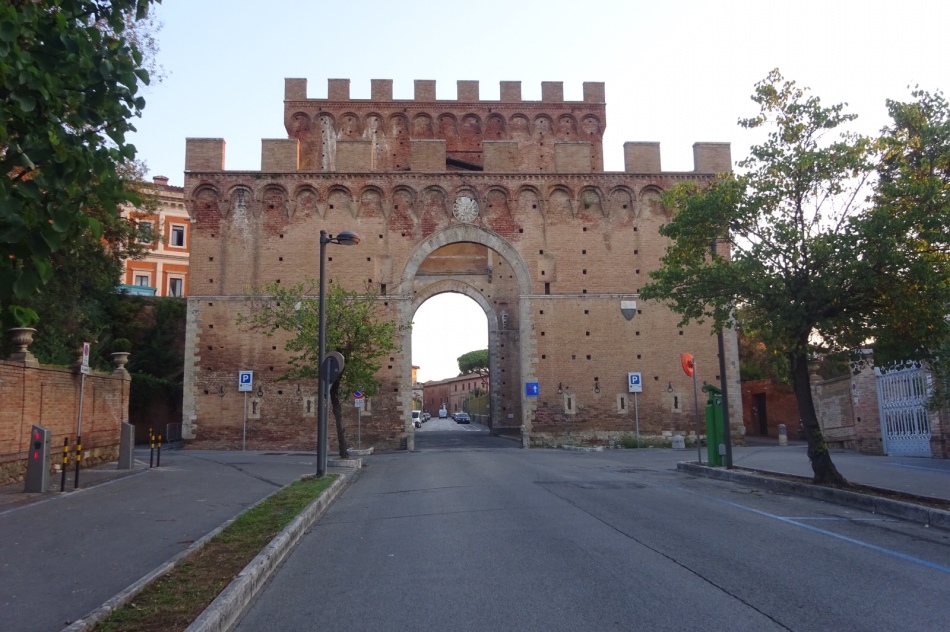 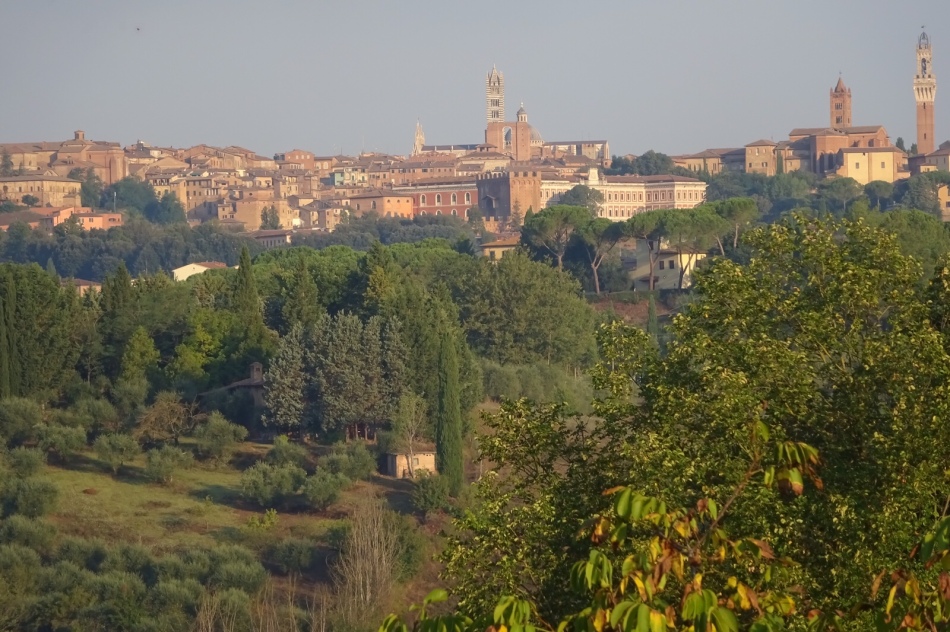 No doubt where the Via Francigena is heading 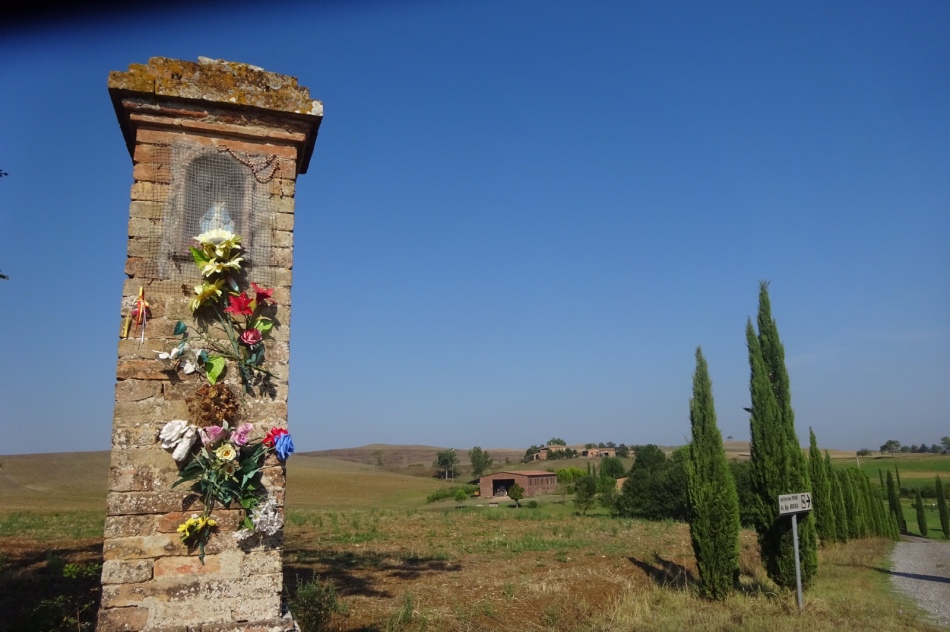 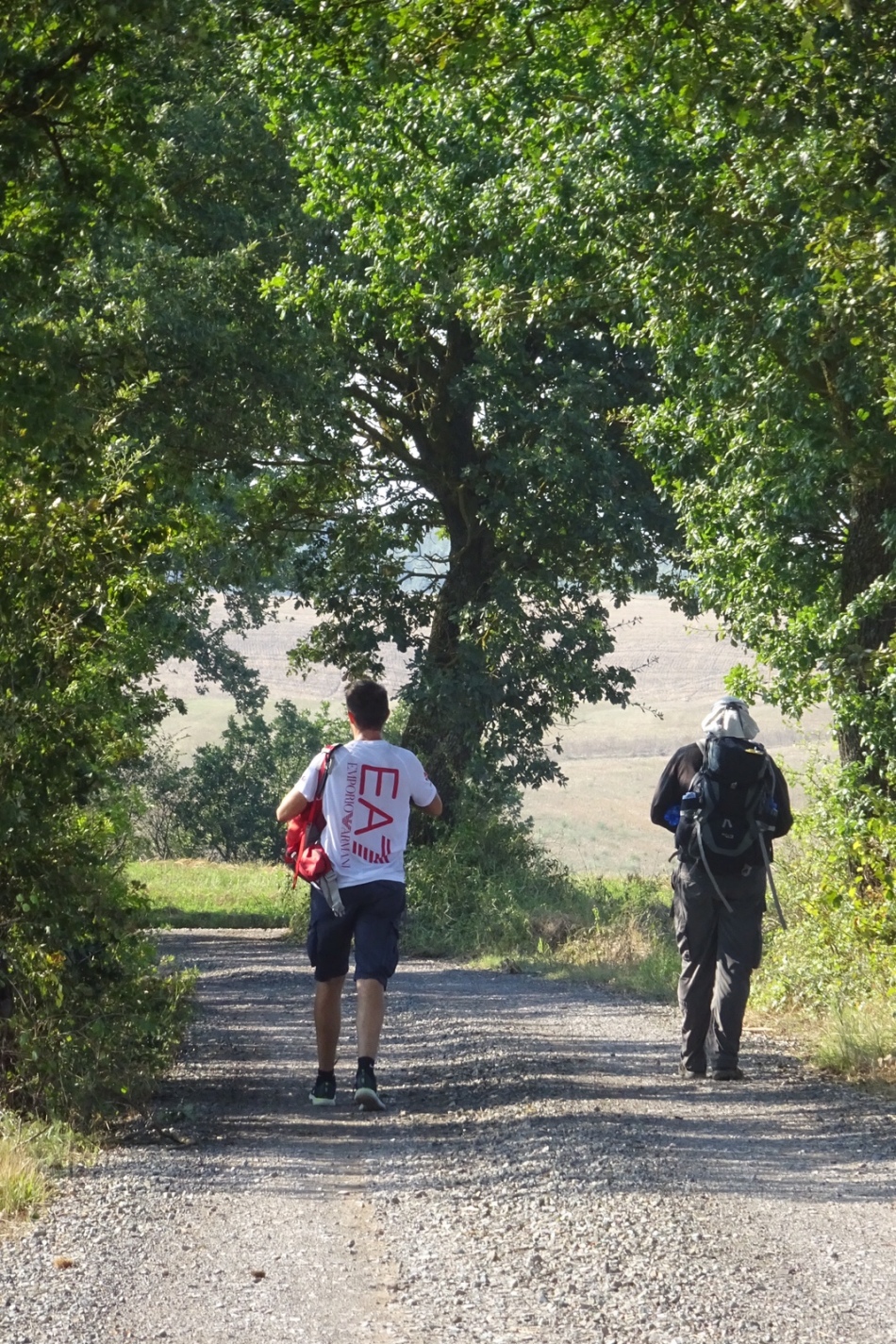 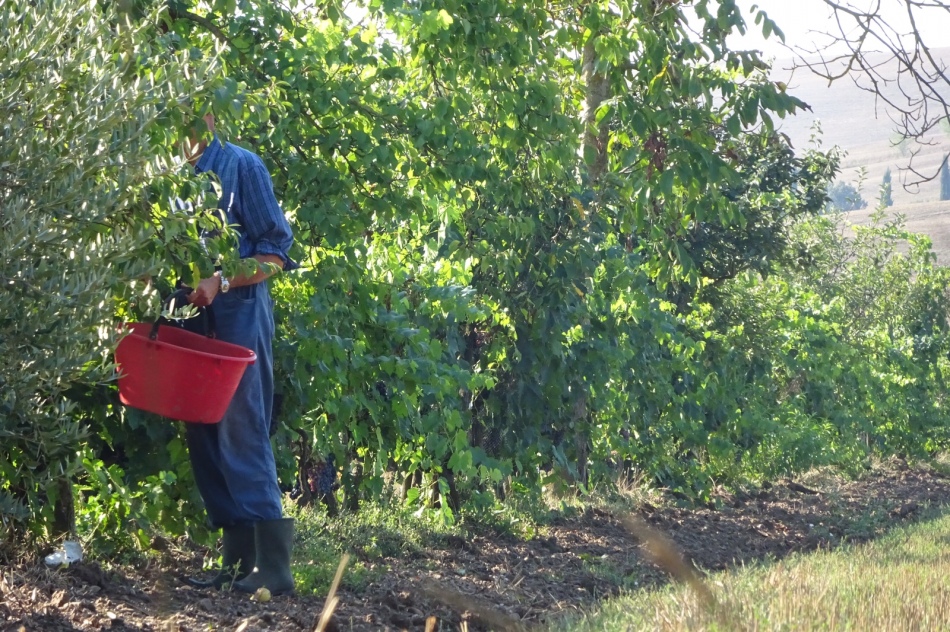 A vineyard worker tending the vines 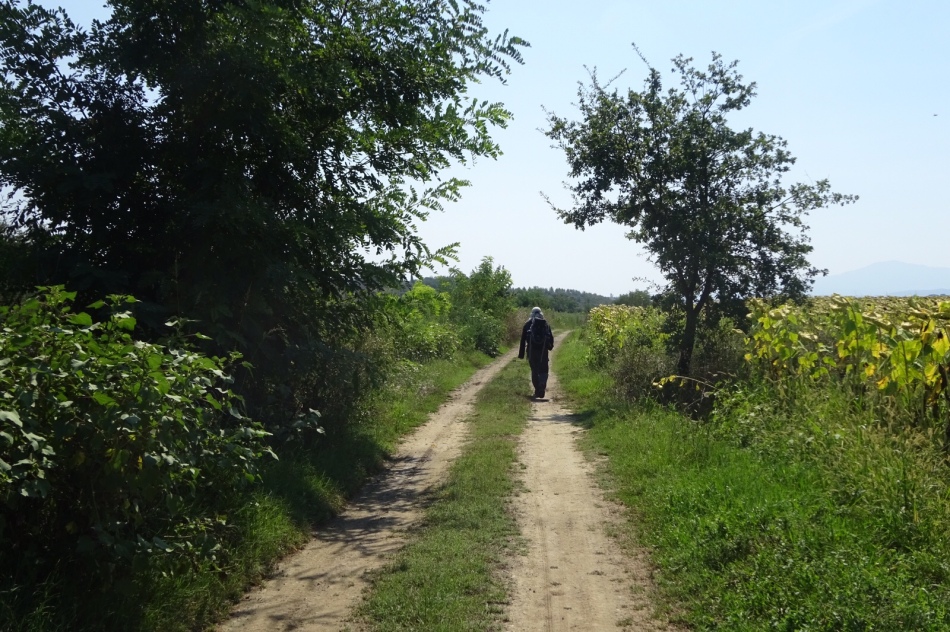 Paul in the midday sun 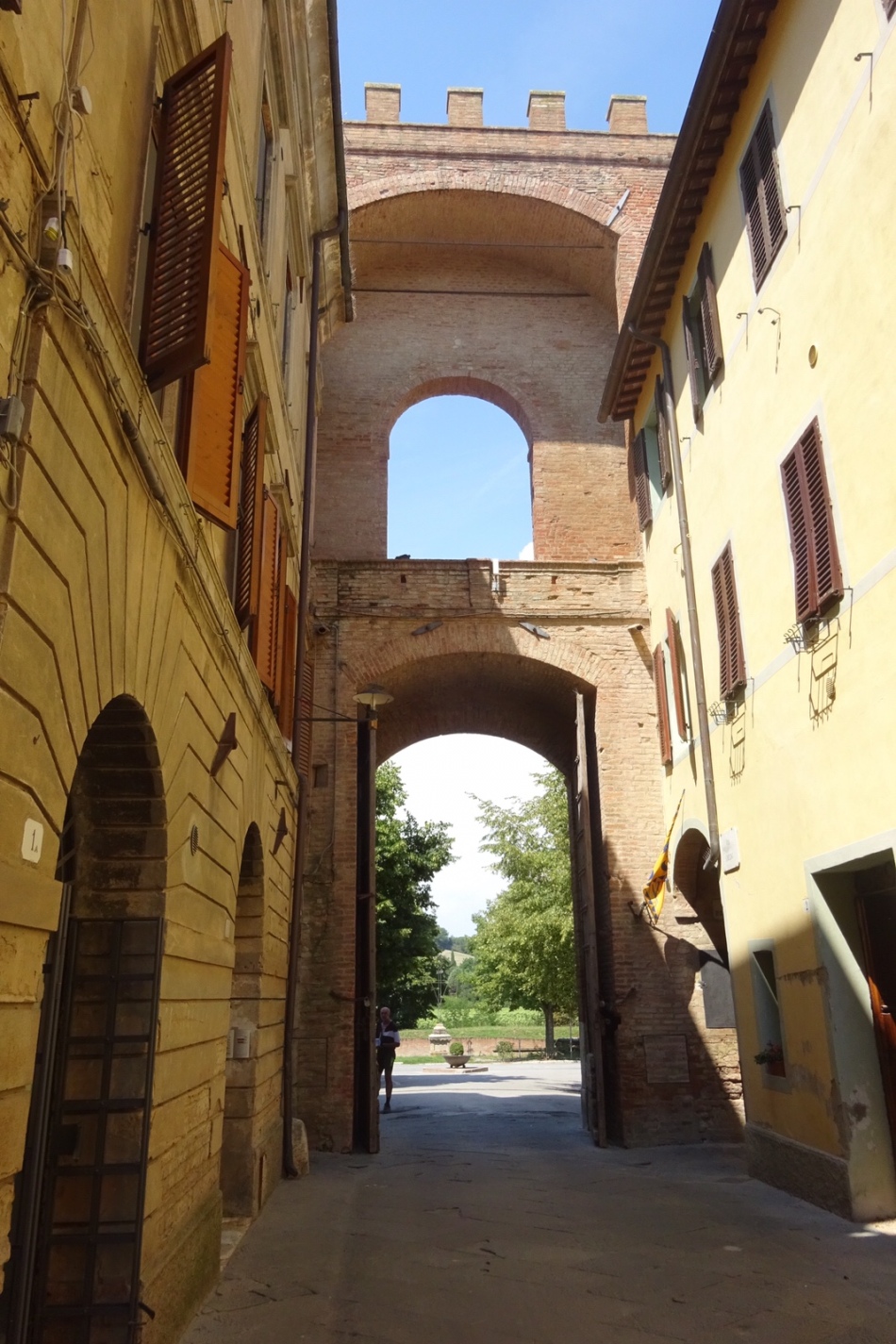 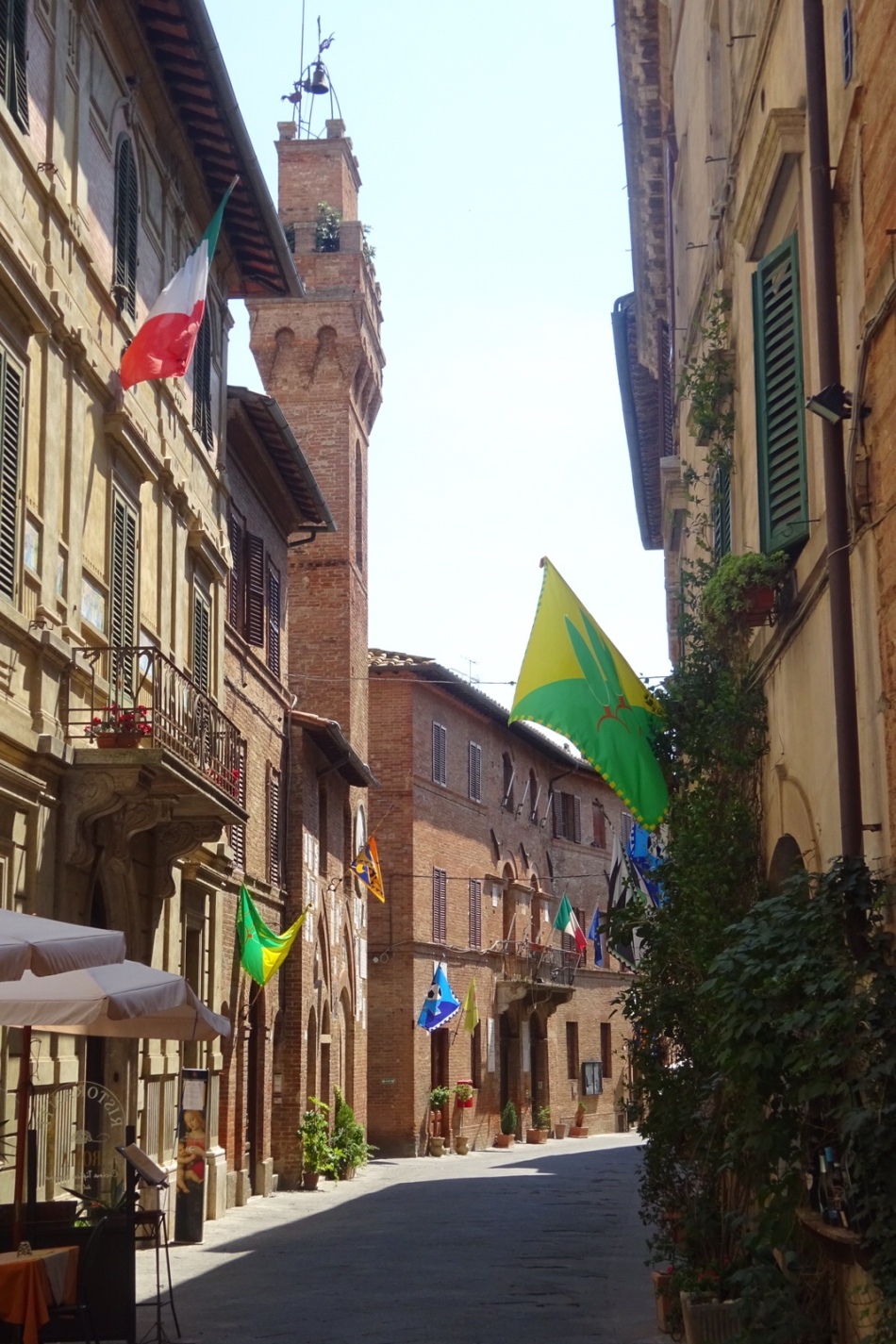