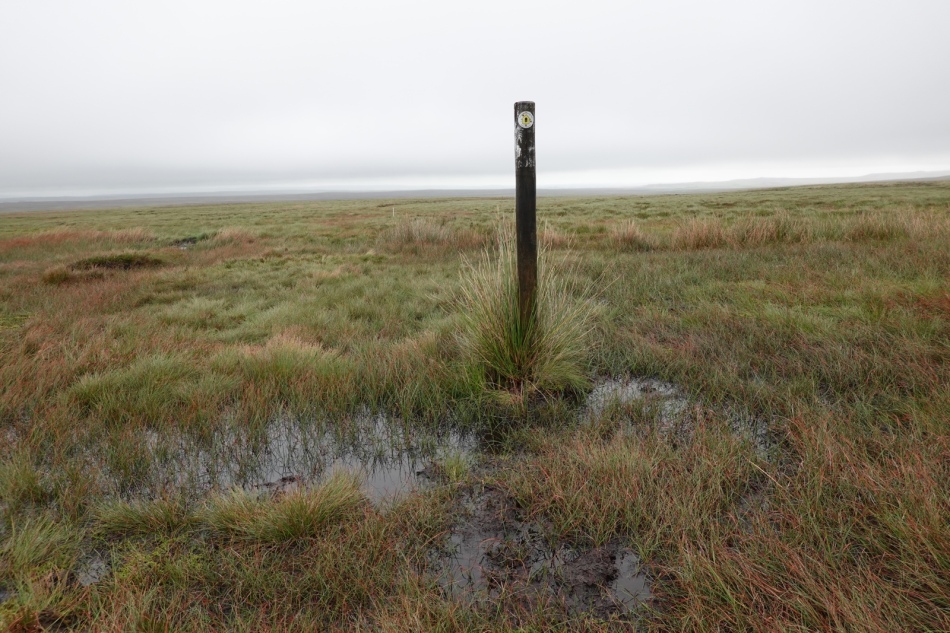 The mountain rescue teams were out early looking for an 82 year old man who went missing yesterday. It was a sobering reminder of the perils of the moors up here.

The weather took a turn closer to autumn as the wind blew more violently and visibility dropped in places to only a few metres. But it didn’t rain. If it had it wouldn’t really have mattered. My feet were soaked walking through the boggy moors. It’s impossible to keep dry. At first you stop and try to map out a few steps through the bog but once you’re feet are properly wet you give up time wasting. You plough forward simply aiming at anything that appears above the water level. Jump, jump, splash, curse, laugh. Sometimes the moss can be resilient and supports your weight but more often it doesn’t. After 5 minutes nothing much matters.

“Beware the moss, beware the moor, beware of Long Lankin”, sang Steeleye Span. Their music resonates up here. It’s really more about The Cheviots further north. There’s a lot of old English folk music in the air. I tried to load some on my iPhone before I left home but gave up at the sight of the hated iTunes. The music of Steeleye Span lives in my head anyway. It comes from our folk club every Thursday night at college. I’ll tell you more about it if things get desperate as I approach The Cheviots. It will cheer us all up.

I crossed Black Moor which rises from 300m to 568m at Tarn Rigg. There was no warning of the horrors awaiting. It isn’t really cold, I’m only wearing my thin trekking shirt and a thin fleece but I have my waterproof layer which kills the wind. You’d need a lot more in winter. Then it was Stonesdale Moor and I had to tread carefully around Mould Gill Coal Level (dis) and various Pits (dis), Shaft (dis), Quarry (dis) and Colliery (dis). Visibility fell to almost nothing on the high ground but I wasn’t worried because I have CAT3 nav.

Jacquii at the B&B told me not to bother with a flask of coffee because there’s a pub. You wouldn’t imagine a pub in such a desolate place. I counted down the metres as it appeared in the mist, the Tan Hill Inn, the highest isolated pub in England at 528m. I could see all the mountain rescue vehicles parked outside and, as I approached, a RAF helicopter flew over me and landed by a flare.

Inside the pub there were a lot of men checking their equipment, ropes, torches etc. Their heat sensing flyby hadn’t found anything so they were preparing to search the many shafts and pits (dis). A family paced around one of the bars and you could feel the despair hanging in the air.

Someone called in saying they knew the moors very well. They had a team of dogs and could be there in 30 minutes but the rescue team already had their own dogs deployed and they didn’t like to mix them.

I ordered a cappuccino and a twix and set off as quickly as I could.

Conditions deteriorated after that. Bricks Hill Swang and Sleightholme Moor were effectively saturated and so was Washfold Rigg. I caught up with a figure who turned out to be Chris from Oxted in Surrey and we splashed along together for awhile. He kept saying how careful he had to be at his age but he was only 64.

Later, the Pennine Way divides for awhile. The original path turns left into the endless bog while the new softies route turns right towards Bowes where a hot shower awaits. For once, I was glad I booked the softies itinerary. 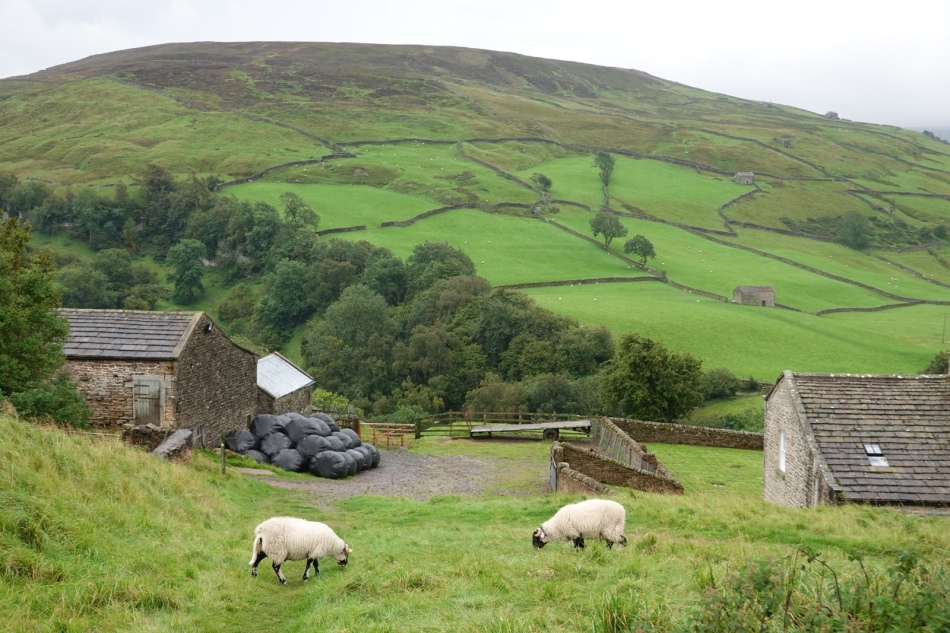 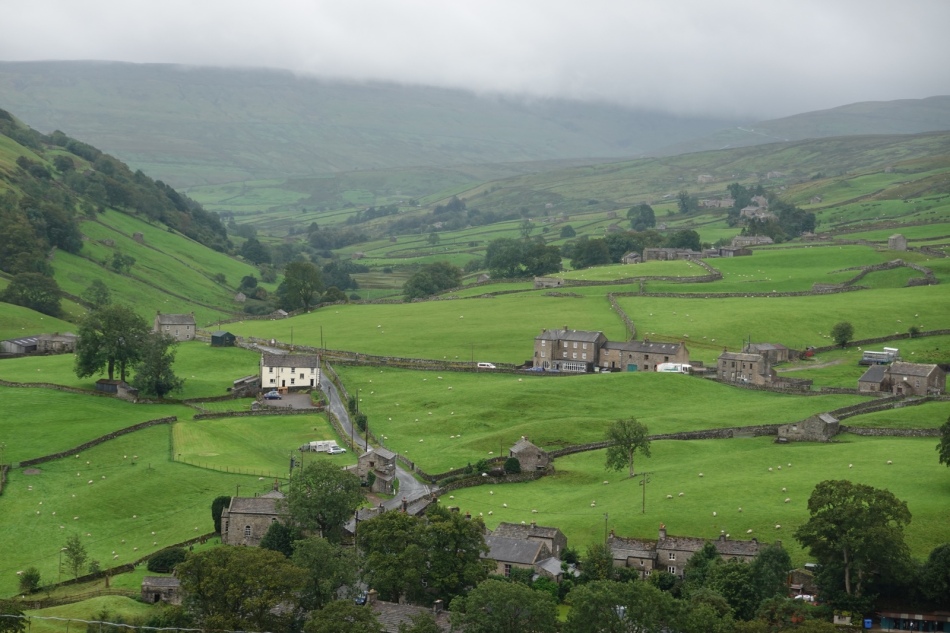 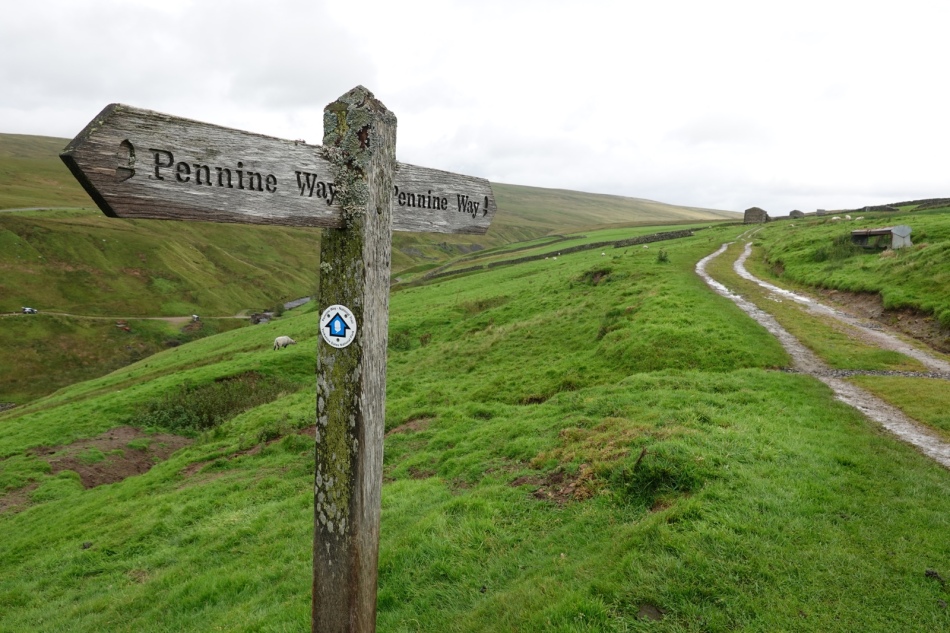 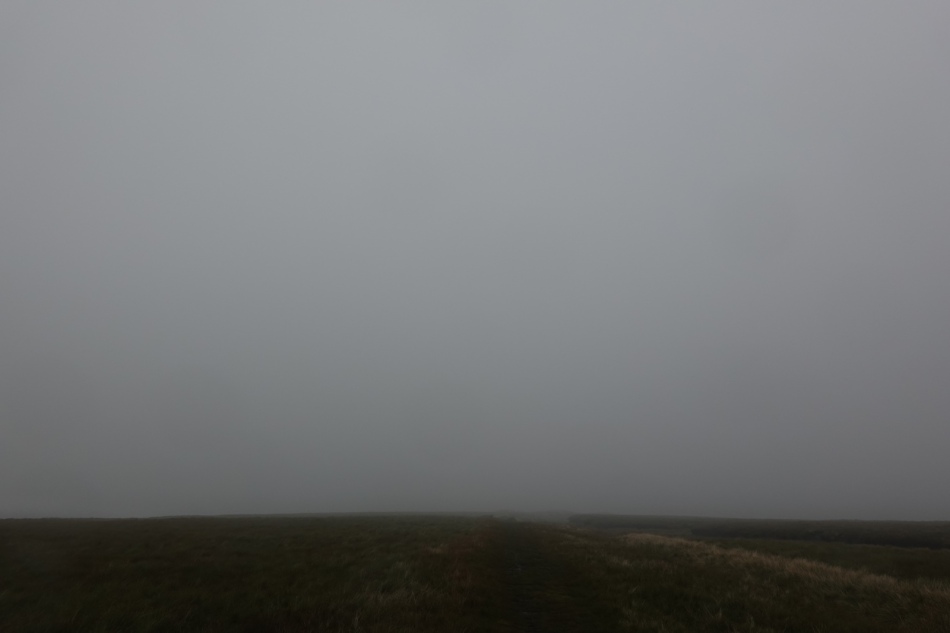 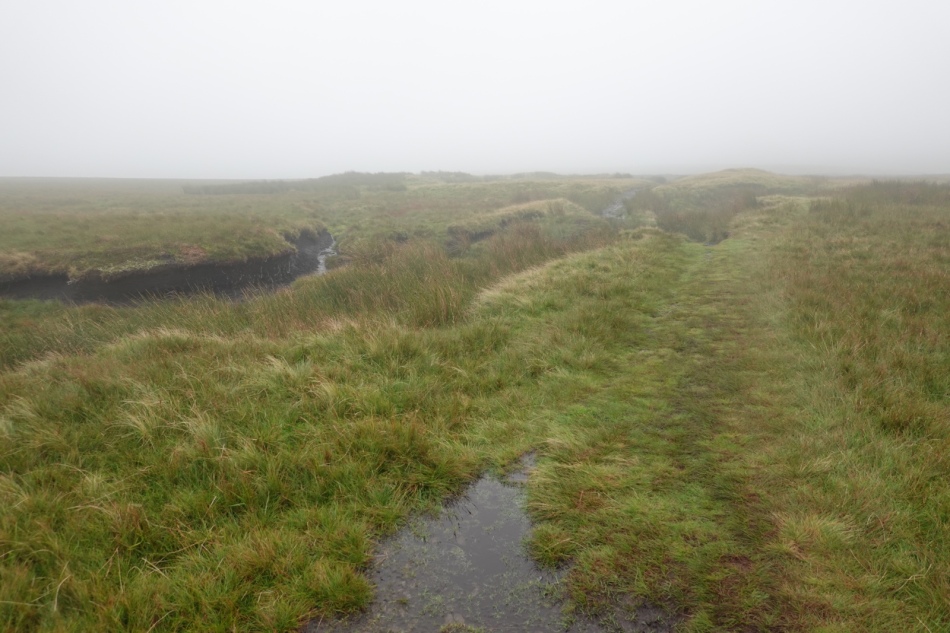 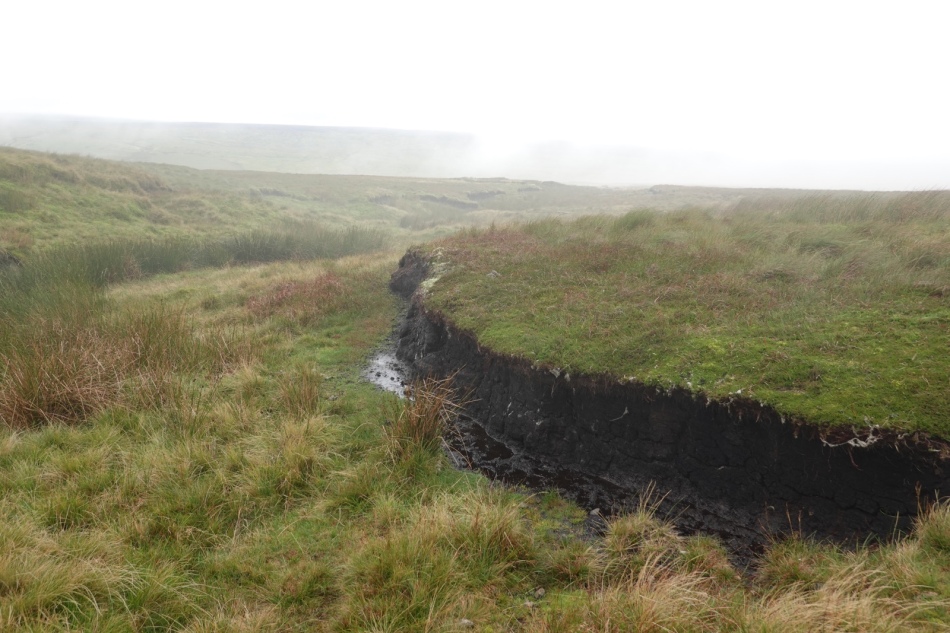 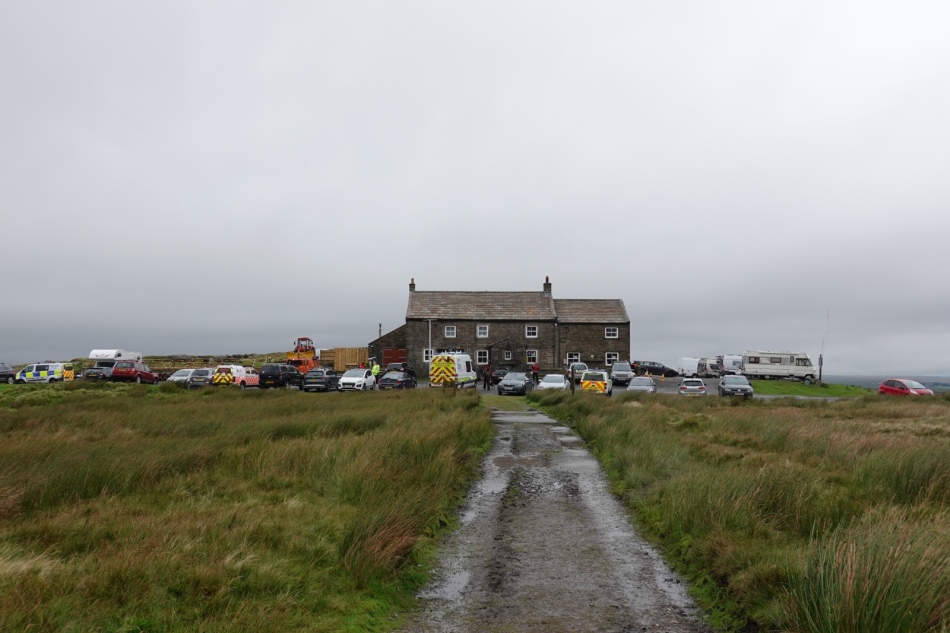 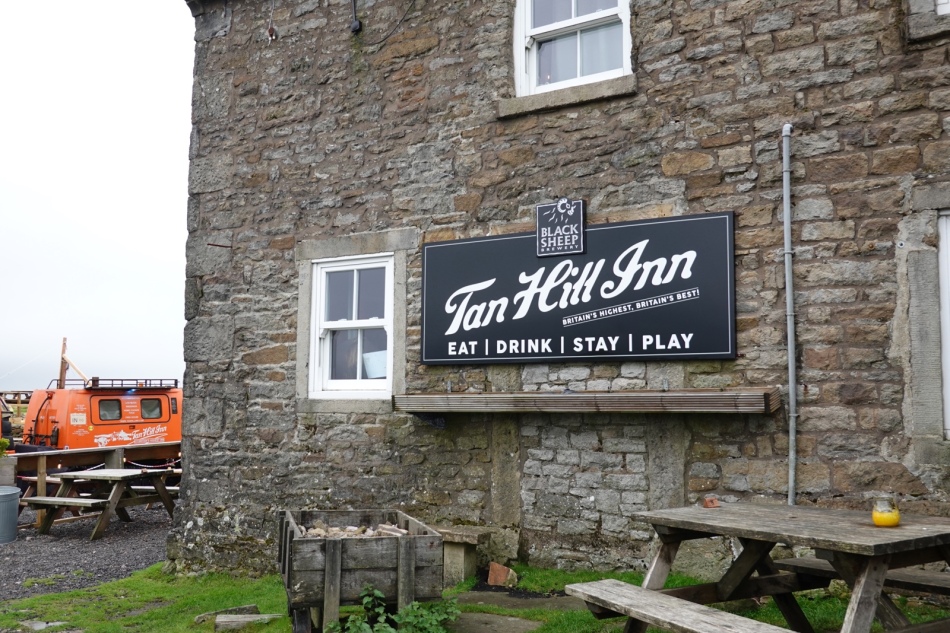 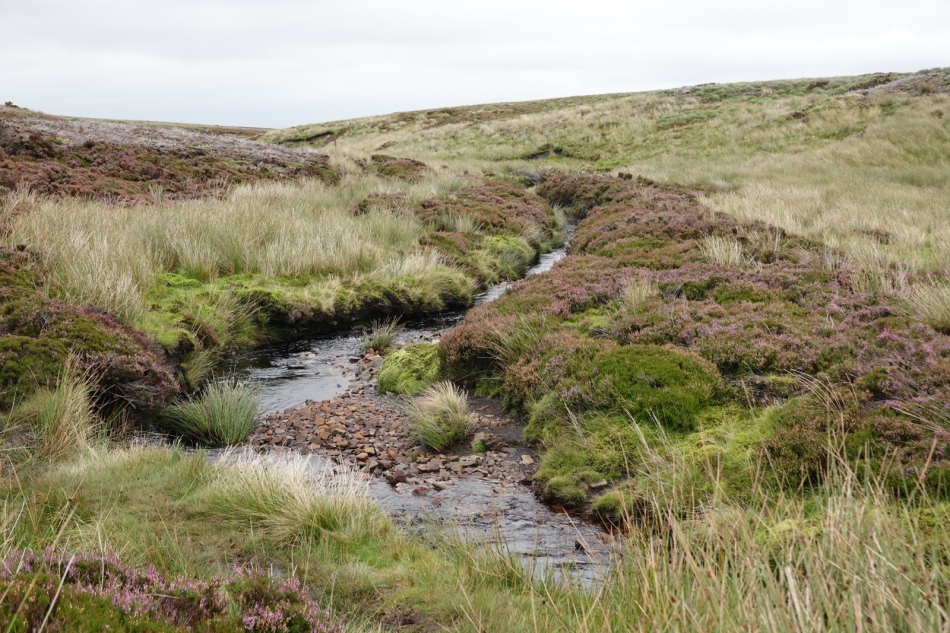 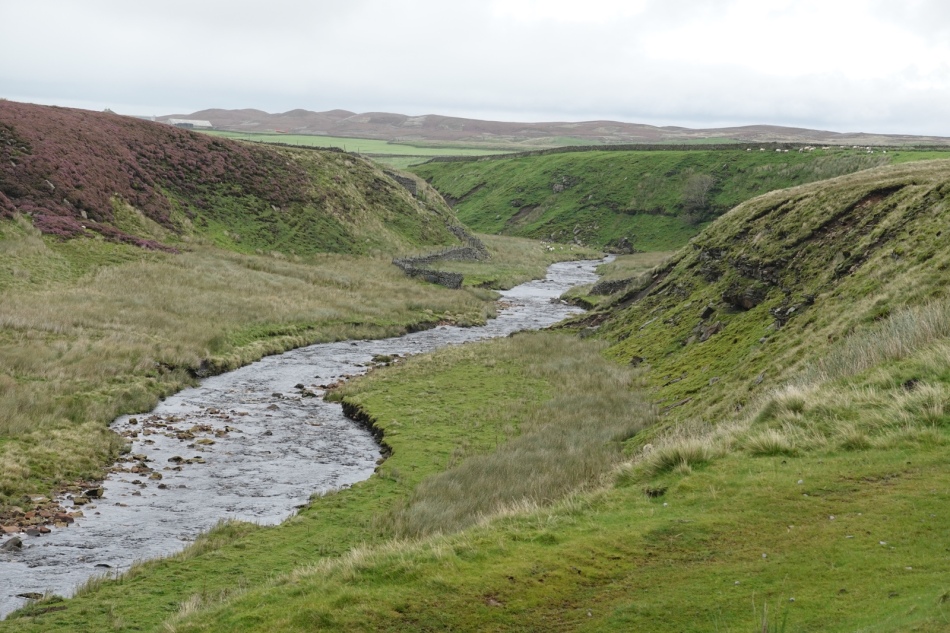 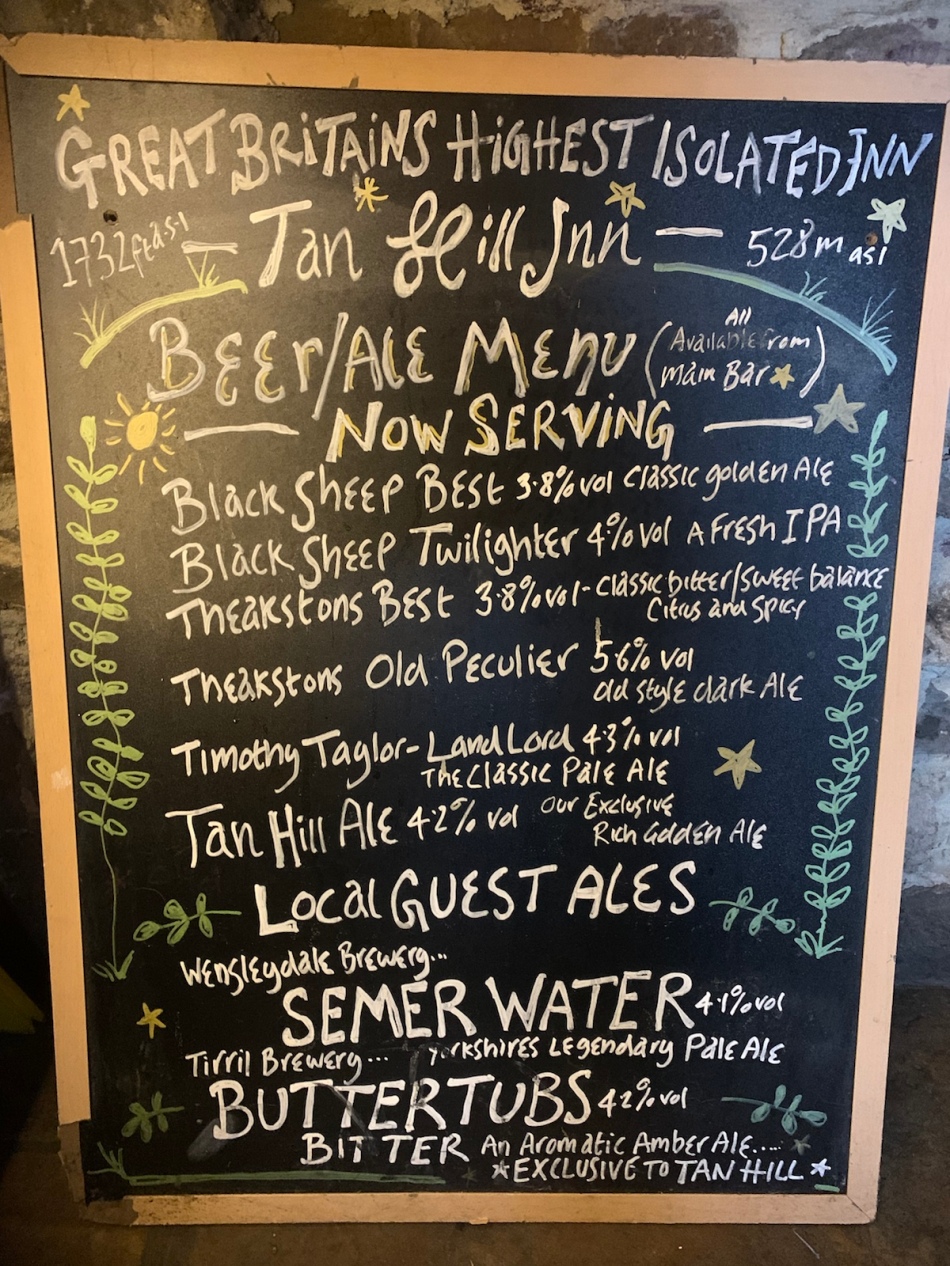 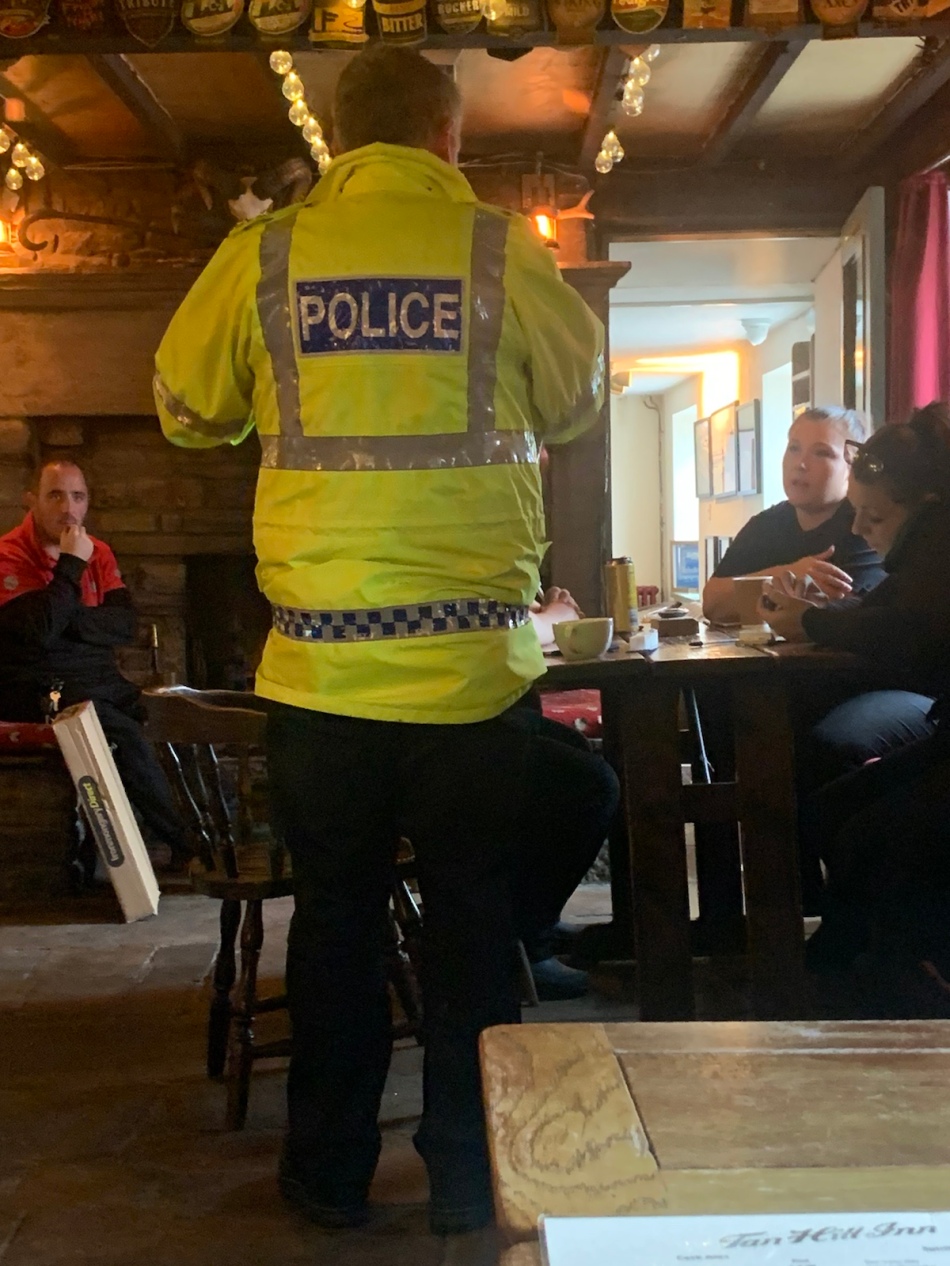 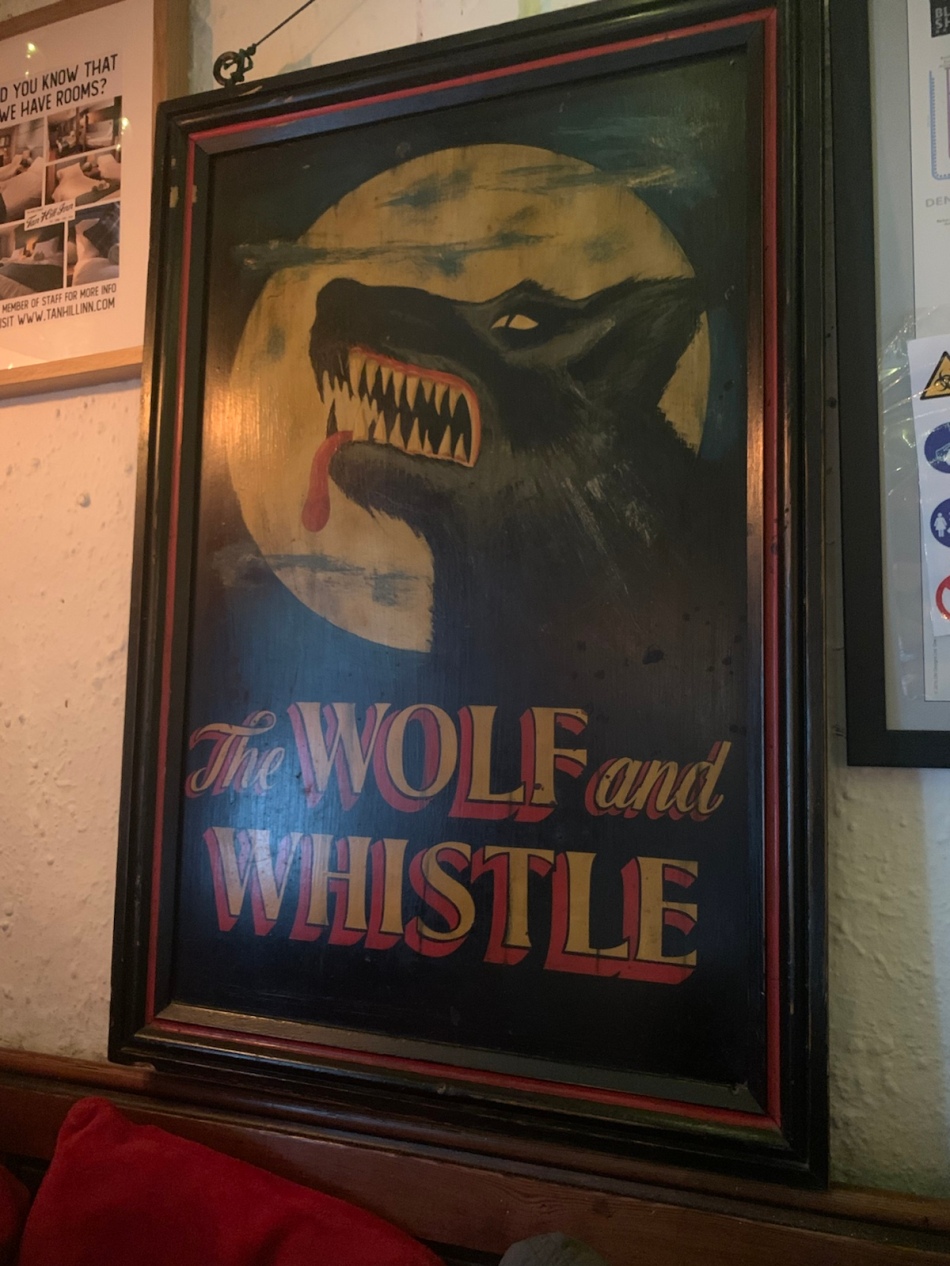 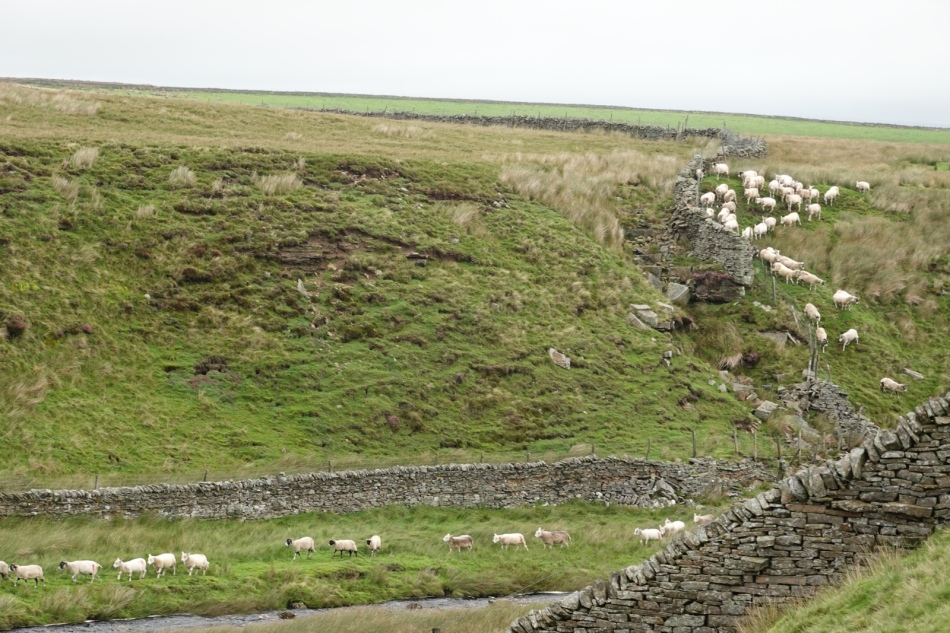 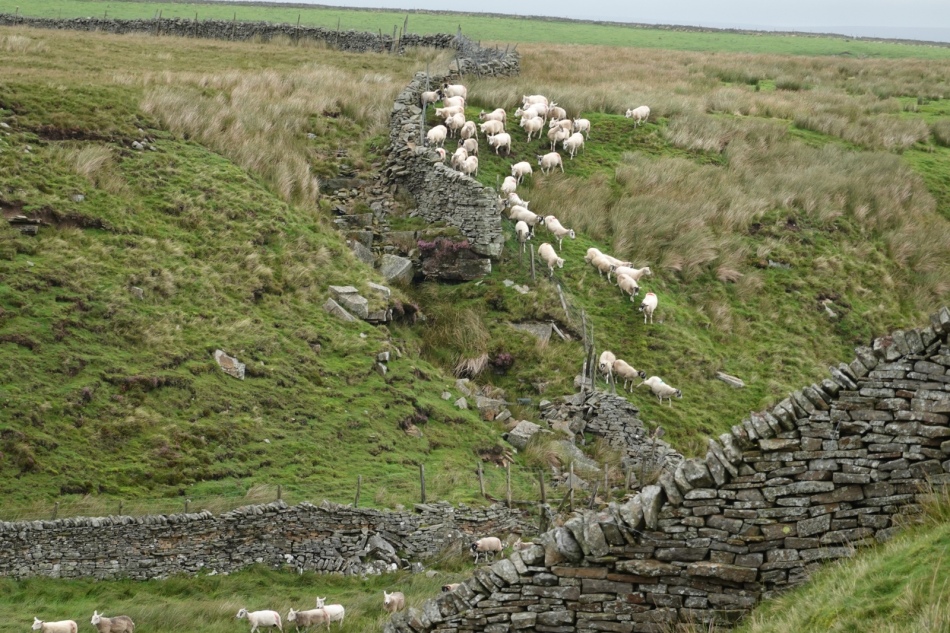 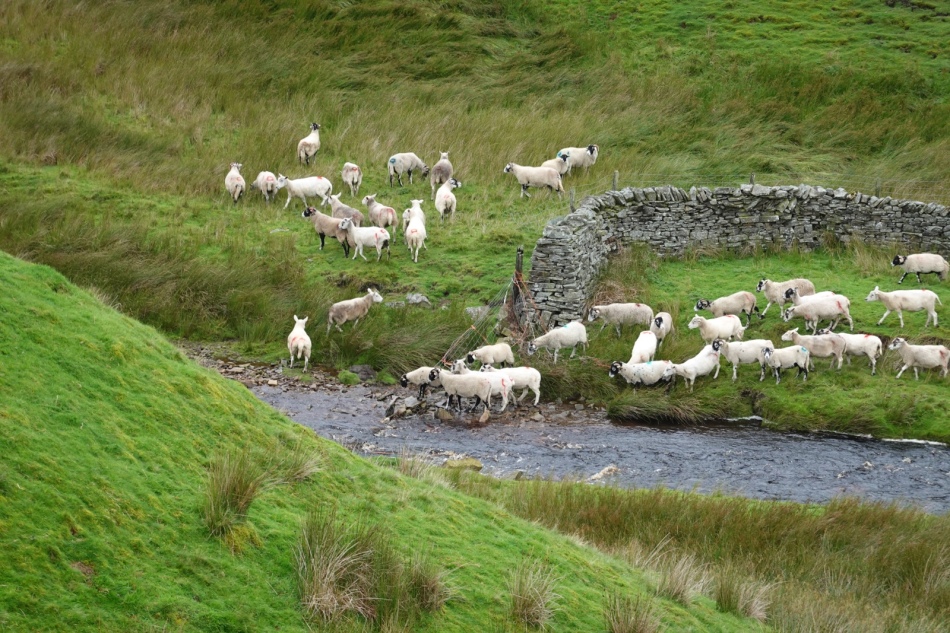 The great annual sheep migration. Watch out for the crocodiles