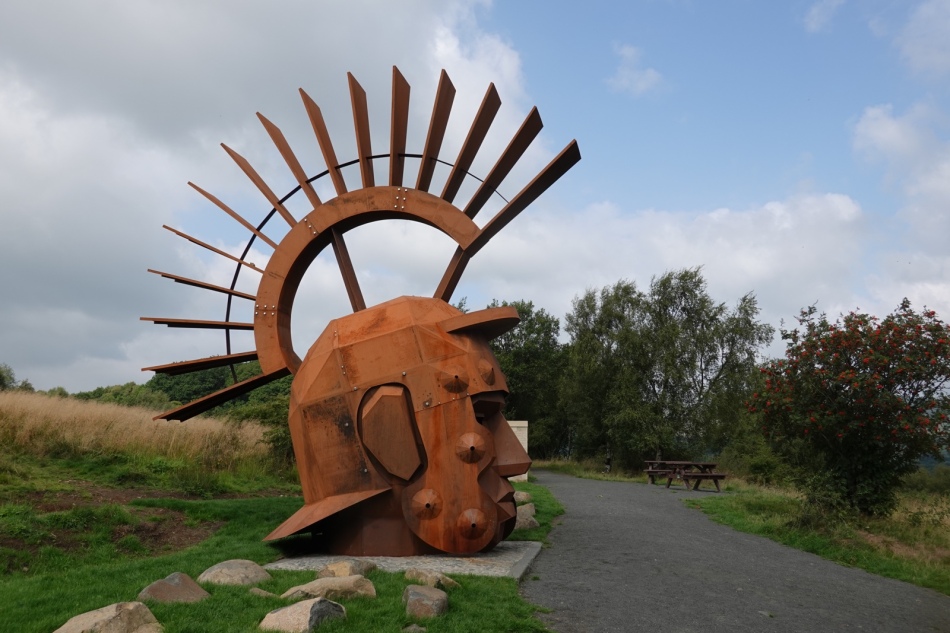 I must have been taught about the Roman Empire at school but I would probably have been staring out of the window or elsewhere in the classroom. However, it’s never too late to catch up with history because you are forever bumping into it when out walking. As I saw last year, Hadrian reached the north of England and decided enough was enough. He built his wall to protect his empire from the people beyond the north of England.

I thought that was the end of it but no! There’s a sequel. Hadrian’s adopted son, Antoninus Pius, conquered the Scottish Southern Uplands before admitting defeat and then they had to build a whole new wall. That made today’s walk a little more interesting. It’s called the Antonine Wall, 63km long, 5m wide and 3-4m high and naturally the John Muir Way runs along it. I started at Rough Castle Fort which is fascinating when you look at the information board (“You are here”) but to the untrained eye it is only a few bumps in the ground. We then set off along the wall which, being built of stone and turf, is more of a ridge and ditch. Not quite as impressive as Hadrian’s Wall.

After that early history lesson, the JMW dumped me on the towpath of the Forth & Clyde canal for a long straight walk through pleasant countryside. This was once the main 18th century expressway between Edinburgh and Glasgow. Today the sun was shining, a man was fishing and a few cyclists rode along, ringing their bells to warn me of their approach.

Just before Kilsyth, I came to Croy Hill and a further section of the Antonine Wall and ditch. Apparently, I was standing on the Croy Hill Fort. There was another information board with an artist’s impression of what lay beneath my feet.

After doing 30Km days over the Southern Upland Way, these 20Km towpath days seem a little short. I arrived at tonight’s hotel just before midday. I might take a late breakfast tomorrow.

4 comments on “Day 24 – Along the Northern Frontier”