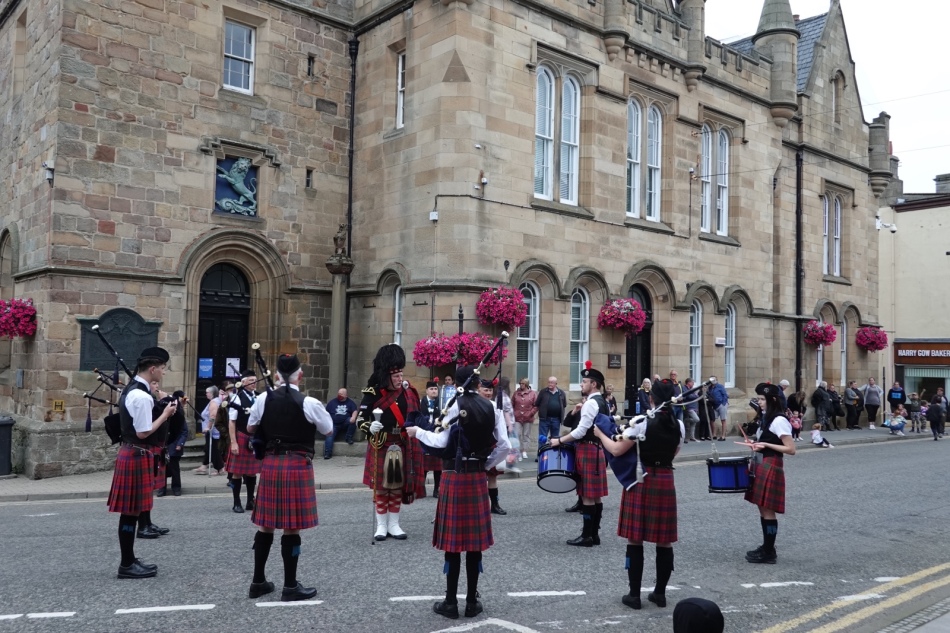 For the first time in two years the Royal Burgh of Tain Pipe Band took to the streets. Life is getting back to normal! If there was a Weybridge Pipe Band and it took to the streets there would be an outcry. But in Tain everyone filled the town centre at sunset to dance to the music of Scotland and the band marched to and fro. It was a moment to flush the dregs of any Scottish blood remaining in my DNA and wave the Saltire, the oldest flag in Europe, and defy the English way down south over the Southern Uplands. If you care to taste the experience there is a 30 seconds video at the bottom.

The owner of my B&B probably works for British Airways. Instead of the usual cheerful breakfast I found a tray outside my door this morning containing a small packet of cereal, a banana and a couple of long life croissants. Rose paid less for her suite in the Royal Hotel overlooking the town centre with a sumptuous breakfast.

We set off on the 4th stage of this challenging trail which took us over a very long bridge across the Dornoch Firth. Soon after the bridge, a path led us down the embankment and we faced the day’s only obstacle: a fence with a style which we both hopped over without difficulty. Believe me, the excitement you’re waiting for, the snake pits with hissing vipers, impenetrable gorse, fields of bracken, cliff edge paths with sheer drops into the deep and raging torrents to be forded without a bridge; all coming in a few days.