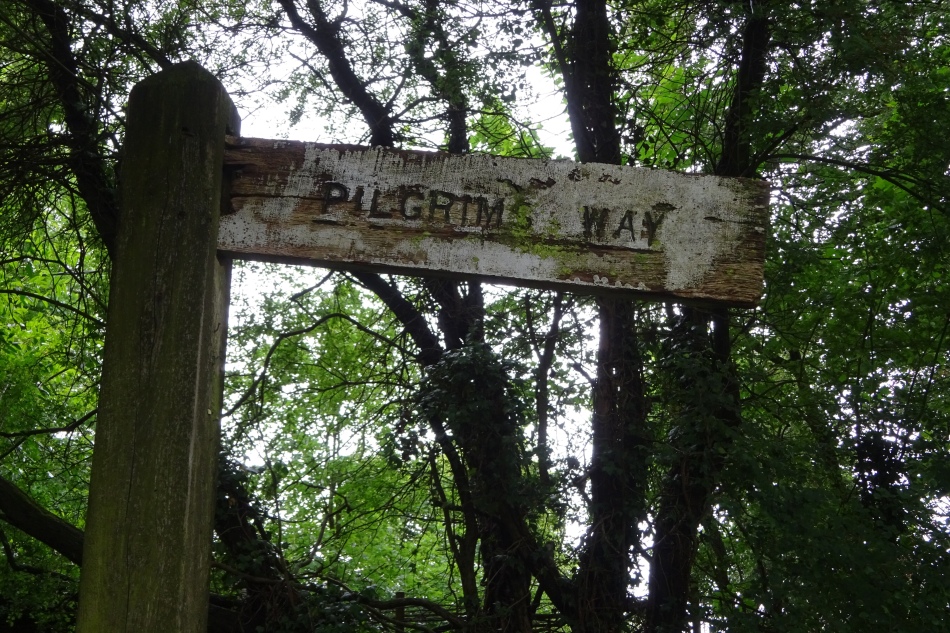 I slept really well last night. Paul mentioned that. After breakfast we set off through the mist that was swirling around the vineyards of the estate. It was a new day and there were new challenges ahead.

The first challenge was crossing the A24 at nearby Box Hill. We declined the recommended subway 400m away and strode out onto the highway when a gap appeared in the traffic. Next we had to cross the River Mole and rather than chose the safe option of the bridge (also 400m away) we, like every family group on a half term visit, elected to use the stepping stones through which the raging torrent roared. The stones were slippery and our backpacks made the crossing more difficult than usual but, as usual, no one got wet. After that came the day’s first climb, up Box Hill. It’s a hard climb but one that I’ve done many times and we were soon at the summit and heading east over a series of hills with spectacular viewpoints.

We met Natalie from Belgium sitting on Juniper Hill enjoying the peace and solitude, until we arrived. Natalie is also walking the E2 European Long Distance Path and is heading for Cape Wrath Via Weybridge and the Pennine Way. I said she could camp in our garden, by the way. She also has the same backpack as me so we had a good chat about that. Natalie is hooked on long distance walking and has completed several trails including the PCT, separated by short bursts of work to fund the next one. We were cheered by the knowledge that other like minded people exist and are roaming the planet.

On Reigate Hill, where contours come thick and fast, we saw a memorial to a B17 (G) Flying Fortress which crashed in March 1945 while returning from a mission to Germany. All 9 crew were killed, the oldest was just 25. They were flying their 13th mission together when the plane came down on Reigate Hill clearing a gap in the trees. This gap has Ben preserved and two oak carved replica wing tips have been mounted on the Down the correct distance apart.

The cafe on Reigate Hill was open and served us another breakfast and then we dropped down to Merstham for lunch at the Feathers. Finally the sun appeared and we crossed the mighty M25 on a pedestrian footbridge, gloating at the speeding traffic. How many times have I sped along that road armed with laptop and other business paraphernalia?

After many days of heavy rain, the path is very muddy and there is much flooding. We have survived so far but there is even worse to come.

After a superb piece of navigation across fields and scientific research laboratories we arrived in the picturesque village of Godstone and our hotel. I was dismayed to see a large banner advertising an authentic Fawlty Towers dining experience so we ate next door (there are at least 4 pubs in Godstone). But not before my friend Diana arrived to buy me a cup of tea and to hear about our journey. And then we briefly met a monk who is walking from Wales to Compostela via Vezelay in central France, a desperately lonely journey. He said a lady named Natalie had told him about two men walking to Rome. 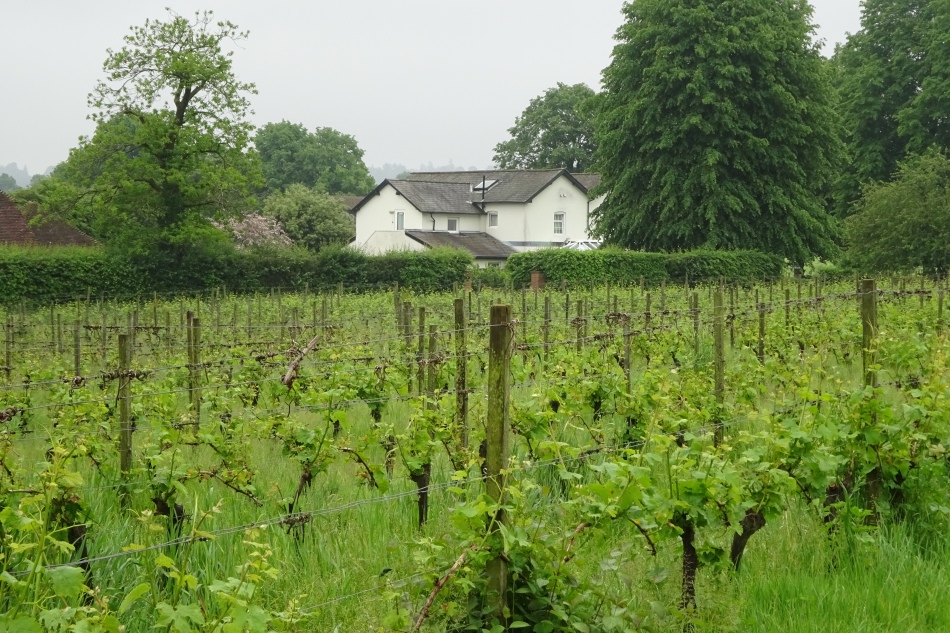 Our B&B among the vineyards at Denbies

The stepping stones over the River Mole

Reigate Hill gap and memorial to the Flying Fortress 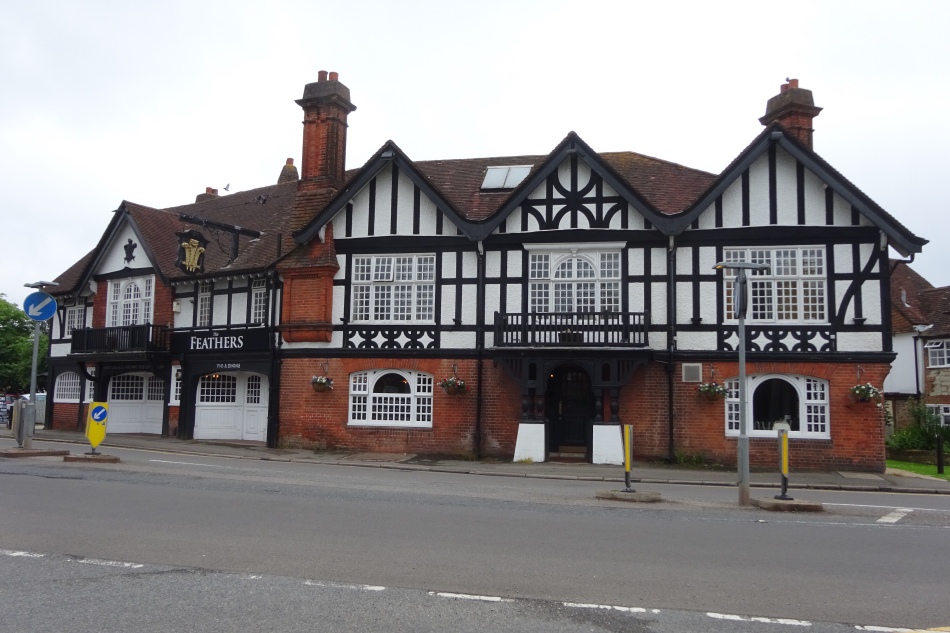 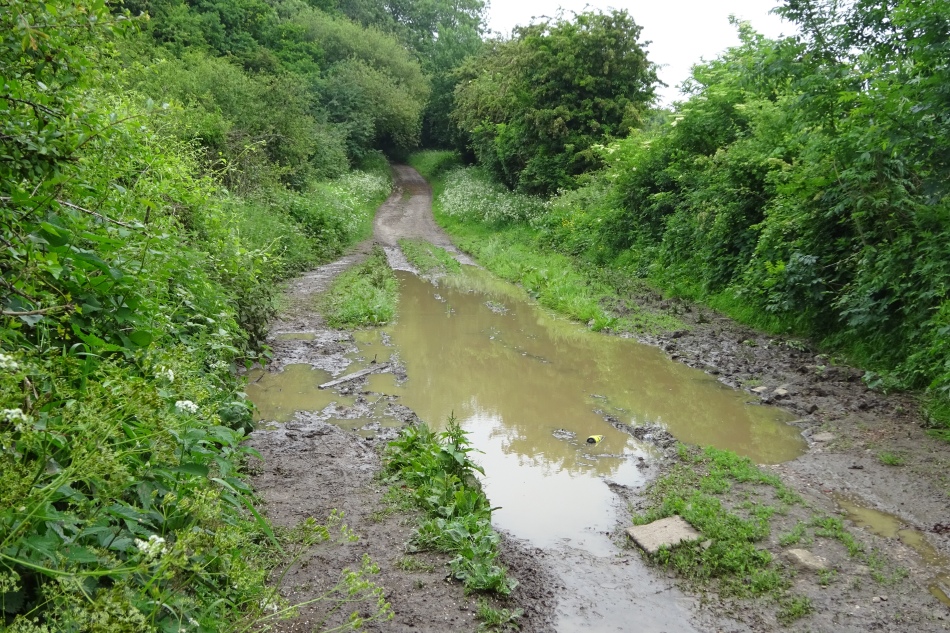 Flooding and muddy conditions on the NDW 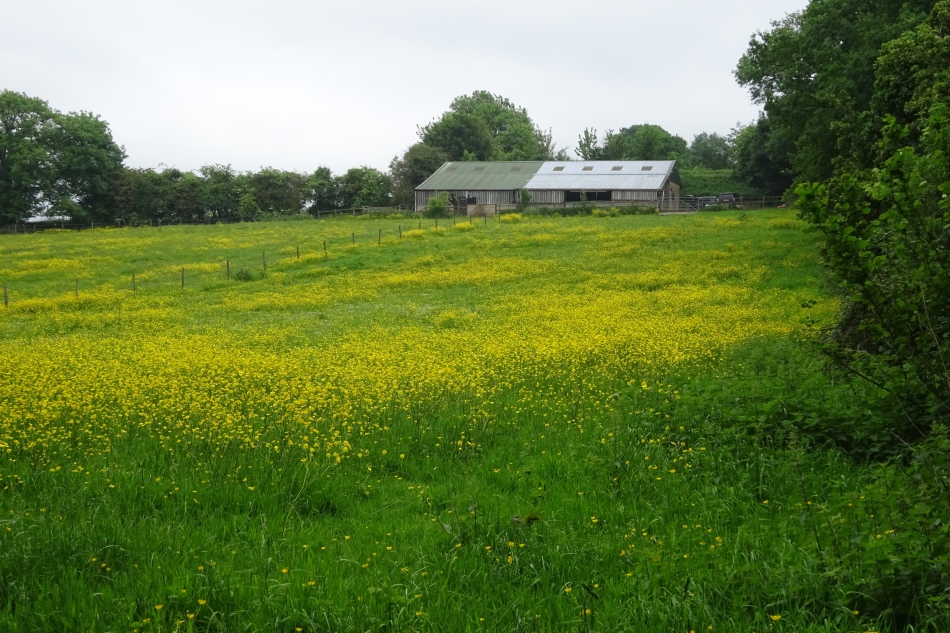 We meet Natalie from Belgium