I was very pleased with my navigation efforts yesterday to steer us off the North Downs Way along local footpaths straight into Godstone. This morning I chose a direct footpath heading NE to intersect the NDW. I had trouble finding the footpath at the edge of town until Paul pointed to a small gap in the hedge. We looked through and saw a heavily overgrown route through fields which appeared to have been undisturbed for years. We set off.

The vegetation was soaking wet with dew and the path itself soon disappeared under water. Instead of retreating we pressed on, crossed the A22 by good fortune then entered a muddy field. After awhile I noticed a herd of cows running towards us. I explained the predicament to Paul and turned around and ran. Paul, unaware of the dangers of dairy herds, stood his ground. The cows stopped inches from him and he tickled their noses while I crept around the perimeter of the field.

We continued to the very edge of the M25 and then edged along the barrier fence until we reached a bridge and the path back up to the NDW. The footpath was exactly as shown on the map but in real life it was a linear bog. We arrived at the NDW soaked through and I poured water out of my goretex boots. I switched to sandals and fresh socks and spent the day with wet muddy socks and sandals while my boots dripped from the back of my pack.

But things cheered up almost at once when we met Eveline & Beat again. For them, having just walked the length of the country over snow covered uplands, the Pennine Way and Weybridge high street, todays conditions were a walk in the park. They dealt with huge lakes on the NDW as I would jump a small puddle in the garden (see photos). There was nothing that this Swiss couple could not conquer. And they were such good company that the kilometres slipped and squelched by, faster than seemed possible.

There was only one pub on today’s walk and we settled down at a table after the landlady gestured to some little blue plastic bags to cover our feet. I suppose they are used to it. Beat generously paid the bill (thank you!) and then we slithered down the final slope of the day to find our accommodation in Dunton Green. Beat & Eveline continued on the path that will take them on the E2 European Long Distance footpath around Europe to Nice. But I hope we meet again.

Tonight we are staying in the impressive Donnington Manor hotel. The bathroom is now splattered with mud and the hairdryer almost burnt out. But my boots and sandals are dry and I’m set for tomorrow’s long 33Km walk/paddle to Rochester and our B&B in Borstal. 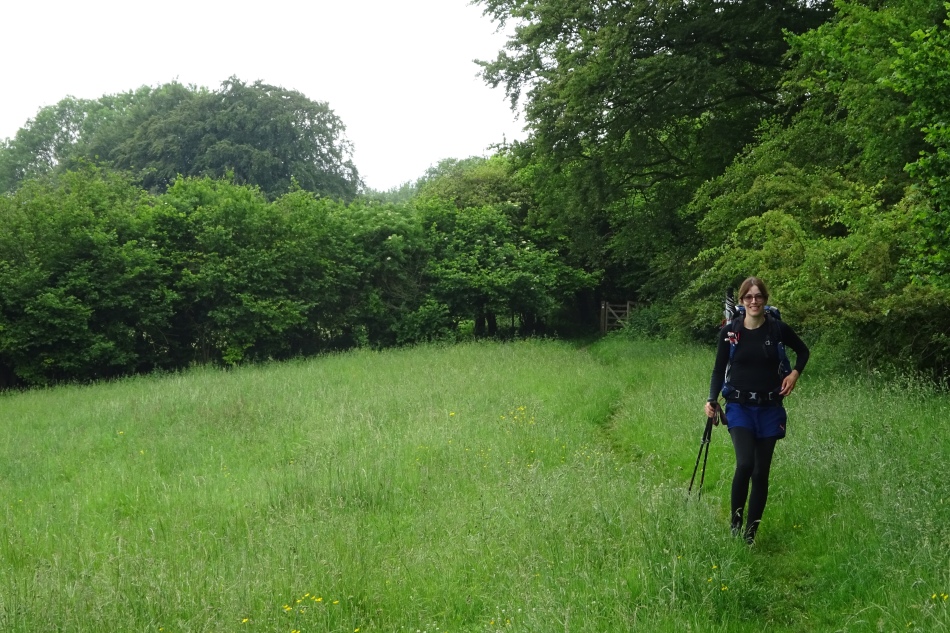 Eveline on the North Downs Way