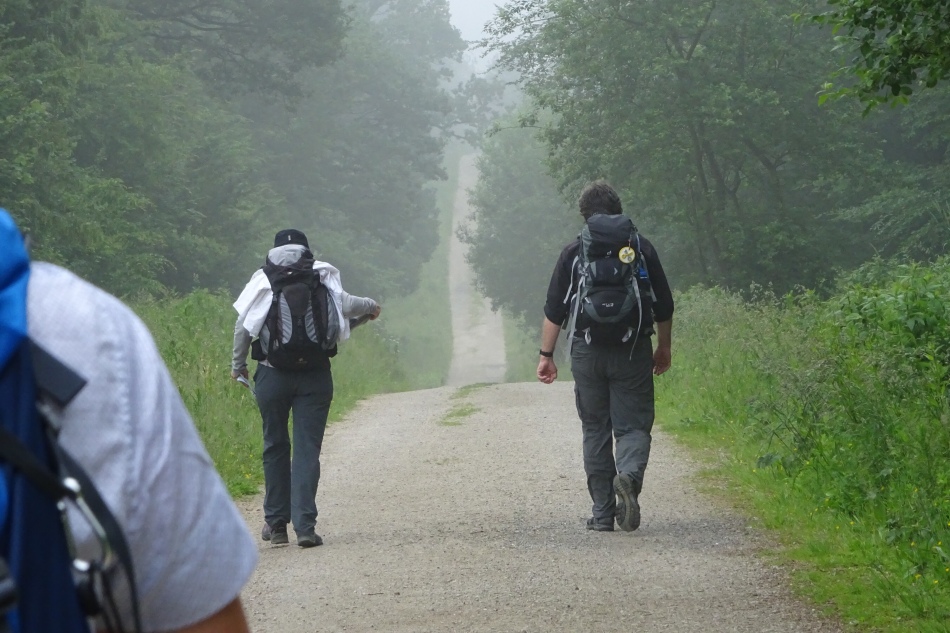 I have a new big toe. It’s normally one of the little ones but now it is supremely enormous on my right foot. I woke soon after 4am to worry about it. Nurse Marie arrived at 7.30 with the emergency kit. She especially went out to the pharmacy yesterday on the instructions of her cousine to buy some new potions and soon covered my foot with bright orange liquids. It looked like a tequila sunrise. “Ooh la la” she said.

The good news is that my left foot has stopped messing about and only required a quick piece of gauze and some Vaseline. It will live to fight another day.

I love the French breakfast. We have seen the last of the scrambled eggs on toast and now we have wonderful baguette and pastries with fruit and green tea. If I lived in France I’d probably eat 2 or 3 loaves a day.

After breakfast we set off on our 26Km walk from Guines to Tournehem- sur-le-Hem. We were back in the woods today and fairly soon we came across railway lines. A Eurostar train sped along, bound for London. Had there been a station just there I think I would have climbed aboard.

I struggled on through the woods but it was a pleasant walk, very atmospheric with lots of dappled light, swirling mist and birds singing. Two women rode white horses along a path, one of the horses was young and rather nervous of us. It was its first hike into the woods so we stood back until they passed.

We have been warned about the difficulties of finding refreshments in rural France. At lunchtime we approached a place called Licques. The village was deserted and the boulangerie had closed at 12.30 but we saw a bar and headed towards it. The bar was quite some distance away so we had time to speculate whether it was open or closed. I made up my mind that it was closed to avoid excessive disappointment. Paul couldn’t stand the suspense any longer and rushed ahead, opened the door and disappeared inside. We were in luck to the extent that there was beer but no food. However, after the beers were poured and some euros were produced, Madame disappeared and made us a cheese and ham sandwich. We all agreed it was the best cheese and ham sandwich we’d ever eaten.

The bar was barely surviving in these chaste times. Claude said the floor tiles were over 100 years old and I imagined the generations who had frequented the place over the years. I feel lucky to experience this vital piece of French rural life before it is gone forever, rather like our pubs.

We took a short cut along a quiet road for my benefit and arrived at our charming Gite “Charmance” in Tournehem. We were welcomed with a bottle of beer in the rose garden and the Madame proudly told me that Brian Mooney had stayed there just two nights ago (Brian is the chairman of the Confraternity of Pilgrims to Rome and is currently walking back from Rome having made the outbound journey a few years ago).

Madame cooked us a magnificent 5 course meal which featured a local chicken and fresh strawberries from the garden. 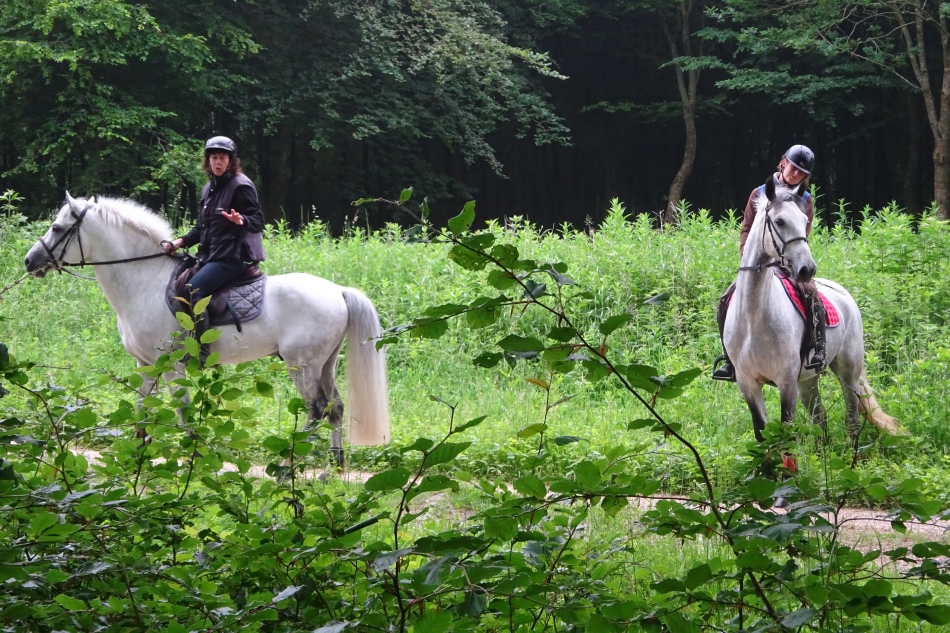 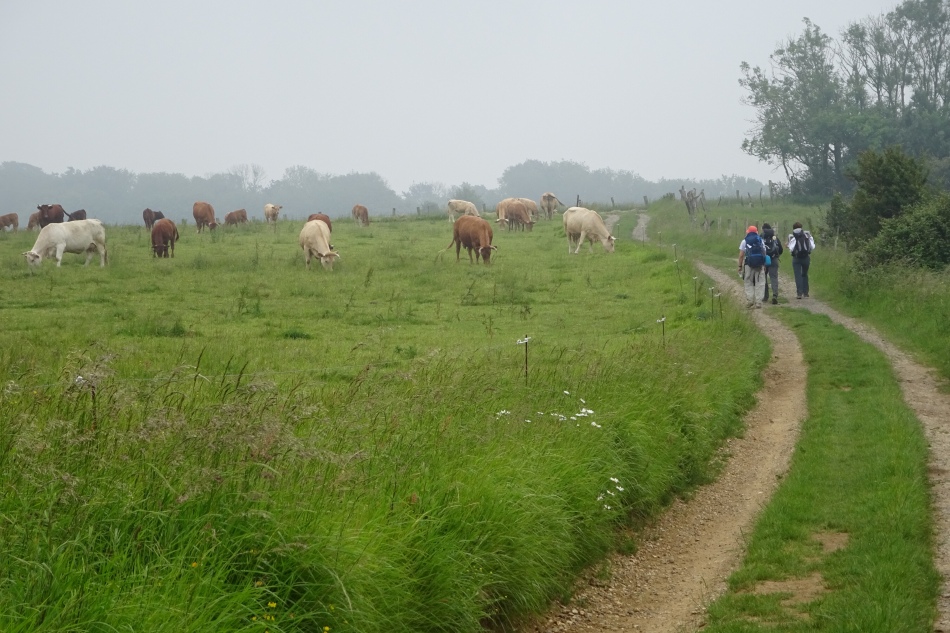 Approaching the bar in Licques. Is it open? 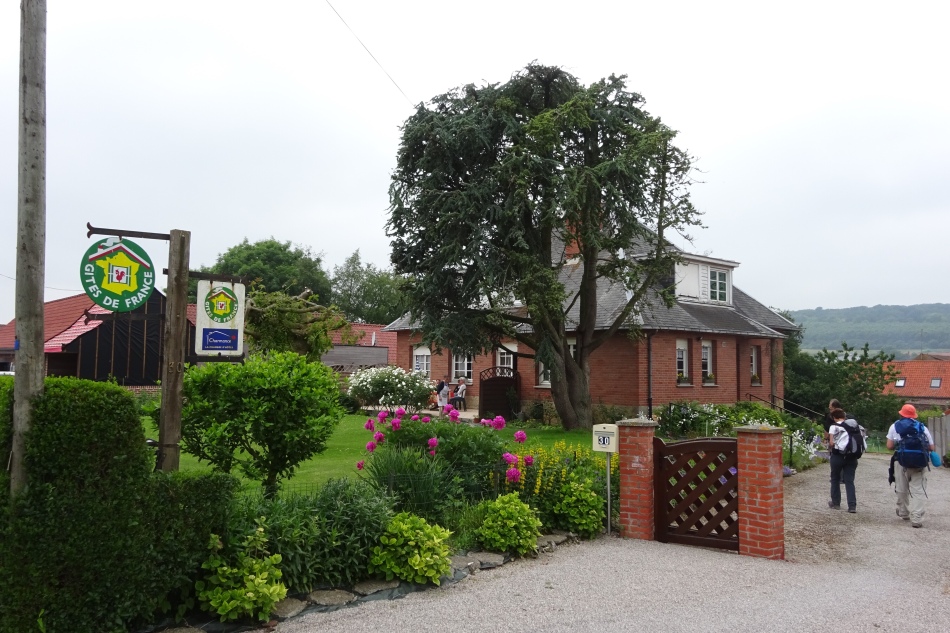 4 comments on “Day 13 – we start to penetrate into France”